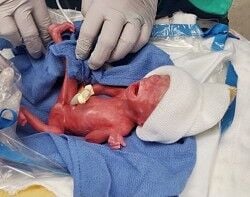 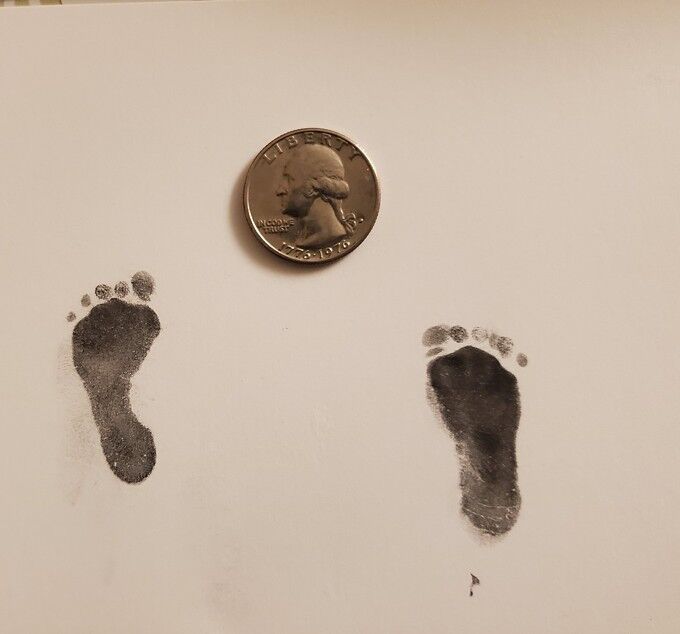 One-pound baby Henry's footprints are nearly the size of a quarter. After his mother had an emergency C-section, the baby was born at 25 weeks.

The smallest baby delivered at Tucson Medical Center in eight years was born Monday morning, weighing in at only 1 pound and measuring 11 inches long.

Upon evaluation, doctors at Canyon Vista Medical Center in Sierra Vista found Nicole suffered from placental abruption—a medical phenomenon that occurs when the placenta separates from the inner wall of the uterus before birth, which can deprive the baby of oxygen and nutrients while causing heavy bleeding in the mother.

Nicole was transferred to TMC in an emergency helicopter flight, while Henry’s father, Kyle Truhill, made the 78-mile drive.

Kyle arrived at TMC to find his wife prepped for an emergency C-section to deliver Henry only 25 weeks into her pregnancy. Doctors gave the baby a 50/50 chance of survival.

“When baby Henry was born, there was a tense stillness in the room until a tiny cry was let out, which provided Mom, Dad and hospital staff a small sense of relief,” TMC officials wrote in a press release.

The hospital said Henry has remained in stable condition this week and has received blood infusions to increase his oxygen levels. The baby has been breathing on his own, and Nicole is scheduled for discharge soon.

“I have never seen something so beautiful, small and fragile in my whole life,” Kyle said. “I felt overwhelmed with emotion in that moment…gratitude, a sense of miracle, relief and sheer terror all at the same time. I’ve never cried so much in my whole life as I have this week. We just want our baby to live.”

TMC said Henry has a long road to recovery ahead of him, but will ideally be released at the end of May or the beginning of June.

To support the astounding cost of the couple’s medical bills, Henry has a GoFundMe page at gofundme.com/f/help-micropreemie-henry.

Here, Henry’s progress will be documented and donations will be accepted to cover medical costs.