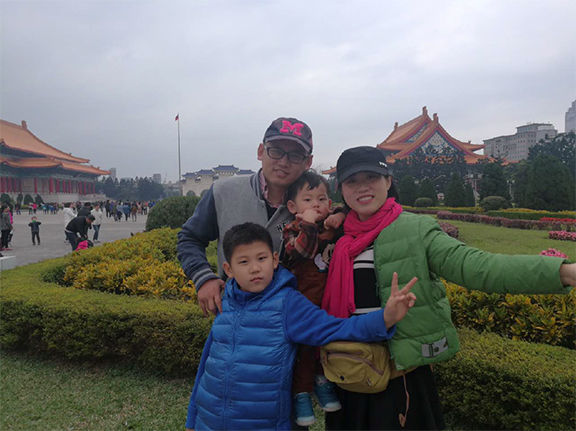 Mei Hu and her family in China. 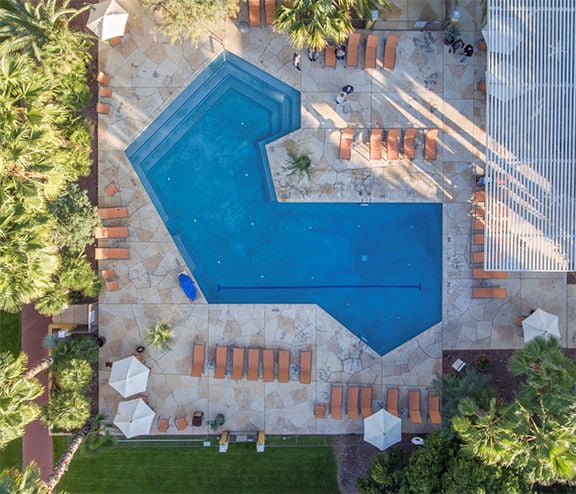 The uniquely-shaped pool at the South Alvernon DoubleTree

On March 18, 2017, Mei Hu embarked on a trip from which she would never return. The 35-year-old Chinese native, in Tucson on a business trip, checked into the DoubleTree hotel across from Reid Park around 8:30 p.m. At 9 p.m., she video-chatted with her husband and two children back in China. At 9:40 p.m., guests found her body at the bottom of the hotel’s pool.

This was not the first time a drowning incident occurred at the South Alvernon DoubleTree. In fact, it wasn’t even the second.

In 2010, a man from India drowned in the same pool while swimming with his wife. In 2006, a teenager nearly drowned and landed in critical condition after attempting to save a friend who was also struggling to remain above water in the pool.

However, jurors on Hu’s case were not informed about either of these incidents, as the judge deemed they would prejudice the jury.

Ultimately, after a 10-day trial this August and September, the jury awarded $2.75 million in “wrongful death” damages to Hu’s family, finding her partially at-fault for the drowning. While the Pima County Medical Examiner’s autopsy report found Hu died of an accidental drowning, without any signs of any other medical problems, the jury did not rule completely in Hu’s favor due to her being a “non-swimmer” and going into the pool by herself.

The jury ruled against the former owner of the DoubleTree, WBCMT, for multiple safety concerns regarding the pool, including a dangerously steep slope from the shallow to deep ends, the lack of a “lifeline safety rope” in the pool, inadequate lighting within and around the pool, and obscured depth markers.

“It’s like they were playing Russian roulette with people,” said Michael Crawford, the Tucson attorney who represented Hu’s family during the case. “You’d think it’s a swim-at-your-own-risk type situation, but the more I looked into it, the more I realized, ‘This is not good.’”

Crawford has served as plaintiff on four drowning cases since 2012, and attributes the main factors in these deaths to be Pima County’s outdated safety codes, along with hotel and apartment owners not securing their pools as part of their “non-delegable” duties.

In the instance of Hu’s drowning, the unique shape of DoubleTree’s pool caused part of the risk. According to the Department of Health, a pool’s transitional slope from shallow to deep should not be steeper than one foot vertical per 10 feet horizontal. But findings after Hu’s drowning indicated that sections of the DoubleTree’s slope were 1 foot per 4 feet. The pool was built in 1974, prior to these codes, and the hotel was never mandated to update the pool.

In addition, the lifeline safety rope (a rope that separates the shallow end from the deep end for people to hold onto), which appears on construction drawings of the pool, was removed.

Hotel employees stated the rope was removed because children were playing on it.

And as for Hu being a non-swimmer, the plaintiffs argue she “was merely trying to go into the shallow end of the swimming pool.” But due to the lack of proper lighting and safety rope, as well as obscured depth markers, the five-foot woman ended up on a “dangerous slope” leading into the eight-foot deep end, became submerged, and drowned.

The jury found Hu and the DoubleTree equally responsible for the drowning incident, and cut the initial $5.5 million verdict in half, with the $2.75 million going to Hu’s husband and children.

Since the 2017 drowning, the owners of the South Alvernon DoubleTree have updated the safety features in the pool, including filling in deep end to five feet, and fixing the dangerously steep slope and inadequate depth markers.

“It’s the most dangerous thing on a hotel property, bar none,” Crawford said. “We’ve gotten multiple pools fixed or filled in, but it takes somebody dying, which is ridiculous. Drownings are almost 100 percent preventable.”

But this was not the only preventable drowning incident Crawford has worked on. In 2011, a young Nepalese boy drowned in an apartment complex on Monte Vista Drive. The boy is believed to have run out of an apartment while his parents weren’t looking, entered the pool area, and drowned. Although the pool was out of operation and permanently closed, the gate is believed to have not been locked. And because the pool was out of commission, the water was a murky green color, making it difficult for a search party to find the boy in time to save his life. According to an aquatic consultant, the drowning could have been averted in numerous ways, particularly if the gate was locked or if the gate opened by pulling, making it more difficult for small children to quickly push it open.

In a similar situation, Crawford represented the family of a young boy who drowned in an apartment complex on East Mohave Road in 2014. Although the gate around the pool was locked, there was a nearby fence of chain link and wrought iron that apartment residents often saw children climbing over to enter the pool area.

In both of these apartment incidents, Crawford said the apartment owners argued they were in compliance with county pool codes and had passed inspection.

“I’m not ragging too much on the county, I just think the codes need to be updated,” Crawford said. “They need an updated inspection checklist that will include more than is currently there.”

Crawford’s goal is for Pima County to align its codes to fit the CDC’s Model Aquatic Health Code, which is a set of voluntary guidelines comprising scientific and best practices to help state and local governments update pool codes. The MAHC is updated every three years and includes recommendations on safe pool construction, maintenance, hygiene and inspections.

Some of the MAHC recommendations include all primary public access gates or doors being self-closing and self-latching, depth marker tiles being in noticeably contrasting colors, underwater lighting illuminating all portions of a pool, and depth markings and safety ropes at the slopes from the shallow to deep ends.

“In regards to pool codes in Pima County, it is also important to mention that the Health Department has a delegation agreement with the state that requires the use of the state code. Provisions of that code would be changed at the state regulatory level,” said Aaron Pacheco, community relations program manager for the Pima County Health Department.

According to Pacheco, there are 30 health inspectors spread among approximately 8,000 restaurants, pools and hotels in Pima County. They inspect public pools once a month, and “semipublic” pools (which apartment and hotel pools are considered) only once a year, although they “try to inspect more often.”

Crawford, who works with the Mesch, Clark Rothschild law firm, plans to speak with the Pima County Board of Supervisors next Tuesday, Oct. 15, about aligning Pima County’s pool codes, which were last updated in 1992, with the MAHC.

“Pool safety is the property owner’s responsibility,” Crawford said. “What we want to do, is to stop them from using the outdated county ordinances as a shield from responsibility… When a code hasn’t been updated in 20 years, you need to look at them. The codes should reflect what a reasonable, prudent hotel owner should do in 2019, not 1996.”

Crawford points to the Virginia Graeme Baker Act as proof governments can successfully update large-scale pool laws in the name of public safety. The VGBA, which became effective in December 2008, requires every public pool and spa in the nation to be equipped with anti-entrapment suction devices, among other safety rules.

While Pacheco says the Pima County Health Department has an “expansive list of priorities” for community health needs, he said discussions are currently taking place about adopting the MAHC.

“We make people fix things all the time if it’s a health and safety issue,” Crawford said. “I believe if you want to prevent deaths, this is how you do it.”