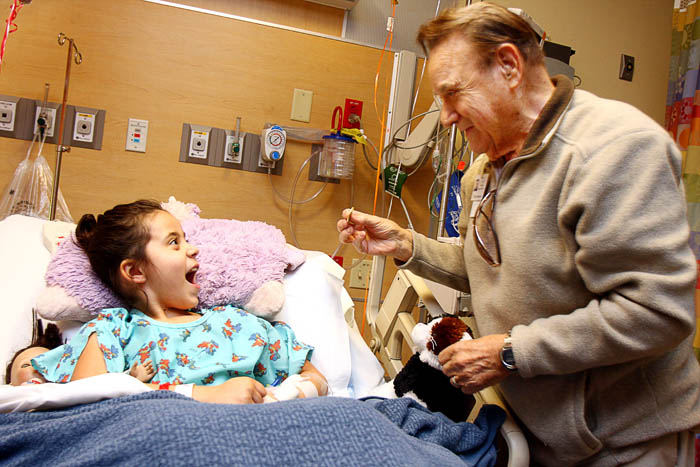 Six-year-old Aamiah Weisenberger laughs with glee as magician Jay Knapp passes a coin from behind one ear to the other at Tucson Medical Center last week. The Oro Valley man regularly visits children like Aamiah who might get a little glum during their hospital stay. 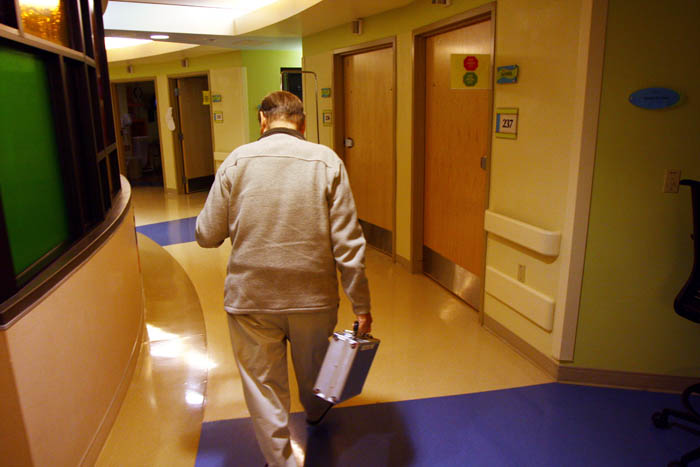 Every Friday, Oro Valley resident Jay Knapp carries his silver suitcase of props from room to room in Tucson Medical Center’s pediatric intensive care unit to perform magic for young patients who are spending days and even weeks in the hospital. Knapp’s magic tricks have cheered up children for 13 years.

Six-year-old Aamiah Weisenberger laughs with glee as magician Jay Knapp passes a coin from behind one ear to the other at Tucson Medical Center last week. The Oro Valley man regularly visits children like Aamiah who might get a little glum during their hospital stay.

Every Friday, Oro Valley resident Jay Knapp carries his silver suitcase of props from room to room in Tucson Medical Center’s pediatric intensive care unit to perform magic for young patients who are spending days and even weeks in the hospital. Knapp’s magic tricks have cheered up children for 13 years.

To make a sick child smile — if only for a few moments — well, that feeling is intoxicating, says Jay Knapp.

The Oro Valley man was walking high at Tucson Medical Center on Oct. 7 after he successfully got 6-year-old Aamiah Weisenberger to not only smile, but also to become excited about the next trick he might have up his sleeve.

Weisenberger had been admitted into TMC’s Pediatrics Intensive Care Unit earlier in the week to have surgery on both legs. Aamiah’s mother, Natalie Weisenberger, said her daughter, who was wearing pink casts on her legs, had been very depressed.

“She hasn’t been smiling a whole lot at all,” said Natalie. “With her being so depressed, having him come in here and make her smile like this is so important.”

Magically, Knapp had Aamiah grinning from ear to ear. He also made her believe his magic was powerful enough to make her doll, Sara, who also had pink casts on her legs, disappear.

Thanks to Knapp’s kindly demeanor, Aamiah didn’t mind that he didn’t make Sara disappear. Then the tiny patient squealed with delight from her hospital bed when he made a coin disappear and reappear; he further amazed the youngster by making a ripped-up page from a magazine whole again.

While the tricks of Knapp’s magic will remain a secret, he has been exposed for being a successful entertainer for children who aren’t sure about their future, who are scared of what is going to happen, and who just need some tender loving care in stressful times.

It’s for those reasons, said Knapp, that he’s been doing magic shows at TMC’s intensive care unit for the last 13 years.

“I’m not a drinking man, but it’s intoxicating to see those smiles,” said Knapp. “I walk out of there knowing I won. I walk three or four inches above the ground. With this type of high, there is no hangover.”

Knapp’s nametag says, “Jay Magic,” and Jolene Eggert, of the TMC communications department, said that’s exactly what he does for children of all ages week after week.

“He’s really good at what he does,” she said. “Parents will say their children haven’t smiled in days, and that day, seeing his magic show, made them smile. It really helps the family as well as the patient.”

Knapp said he is all about making the pain go away, and bringing in laughs and smiles, if only for a short time.

“Kids have to be reached on an emotional level after the doctors get done with all the technical stuff to save their lives,” Knapp said. “I tell these sick children that magicians know everything, and they are going to be OK.”

Knapp’s stories are endless from children at the Arizona School for the Deaf and Blind who he’s reached, to the kids he sees weekly at TMC. After 13 years of performing, Knapp assures he still has plenty of tricks up his sleeves with no intentions of stopping.

Knapp, a self-taught magician, said about 14 years ago he retired from a career in real estate and was unfulfilled by discussions about what to eat for dinner or dessert. He needed more from his retired life.

After tutoring students in reading at local elementary schools, Knapp said he reached one child who was reading well below his grade level. After using some magic tricks, Knapp eventually got through to the young man, who started reading two grade levels higher and continued to improve.

Eventually, Knapp said he was meeting with members of the Society of American Magicians, and they talked about doing magic shows for children at hospitals for Halloween. Soon, a Halloween show turned into weekly Friday visits at TMC.

Because of his dedication to children, Knapp was named the 2010 Rotary Club Oro Valley Citizen of the Year.