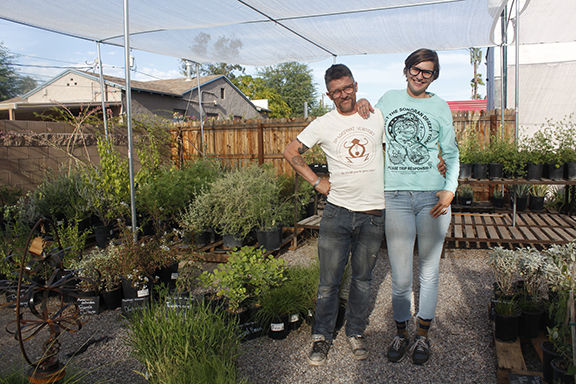 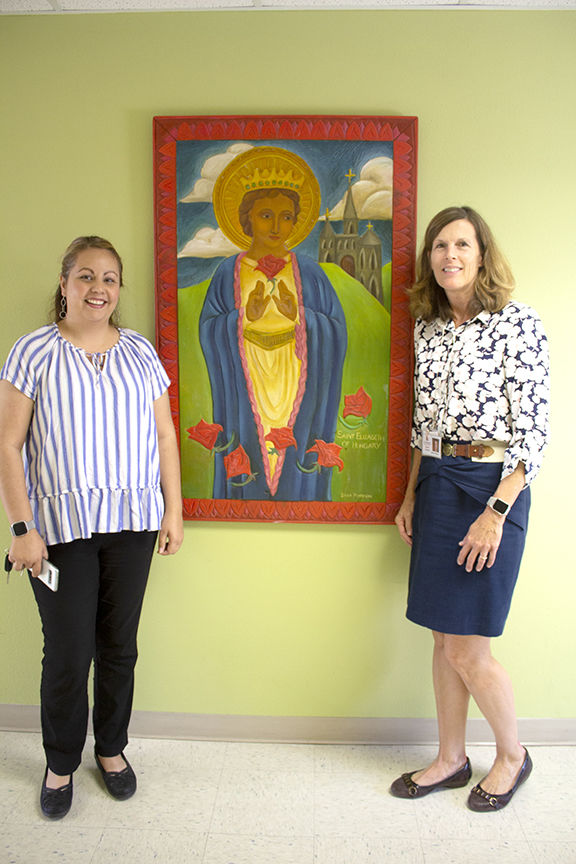 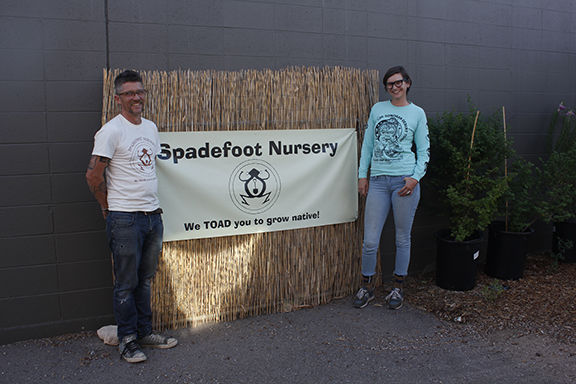 She wasn’t doing a self-exam,or anything like that. Katy Gierlach was just drying off after a shower when she felt a lump. She asked her partner, Jared McKinley, to feel it. It seemed too large and hard for them to not have noticed it before.

“I just kind of pushed it to the back of my mind,” Gierlach said. “I was like, it’s probably nothing. I’m not going to deal with it, and I didn’t want to know. It’s that thing of, like, well, if I don’t deal with it, then it can’t be anything.”

At the time, she worked as a bartender and social media marketer at Tap & Bottle, so the amount she was making in tips meant she didn’t quite qualify for the Arizona Health Care Cost Containment System, or AHCCCS. She and McKinley were in the middle of launching a magazine. She often did modeling work. But she didn’t have health insurance.

After a bit of procrastinating, she went to see a doctor, who took a look and told her she’d need to get it checked out further.

The road to a cancer diagnosis and through cancer treatment is often something like being in a pinball machine moving in slow motion. One doctor’s referral leads a patient to another doctor in a completely different area (sometimes both in medicine and of town). The wait between appointments is interminable, but when the appointments come, they go by quickly: a biopsy, a shot, an oncologist, a specialist, a blur of information and too many pamphlets and papers, each ending in a slow-motion catapult toward whatever’s next.

Without insurance, there’s the added obstacle of figuring out how to pay for all of this.

“That was a big thing for me, just thinking, ‘Well, if it’s cancer, I can’t afford cancer,’” Gierlach said. “If I pretend that it doesn’t exist, then you don’t know.”

Eventually, Gierlach managed to become part of the Well Woman HealthCheck Program, part of the Arizona Department of Health Services which helps women gain access to breast and cervical cancer screenings. She bounced her way to St. Elizabeth’s Health Center, a local organization dedicated to supporting the healthcare needs of the uninsured and underserved in Arizona, where they gave her a biopsy.

She remembers the day she got the results back. It was August 21, 2017, the day of the much-buzzed-about solar eclipse. Karrie Cravens, a nurse practitioner who is in charge of the clinical side of the breast cancer programs at St. Elizabeth’s, had come in briefly and said that she needed to finish with another patient, but that she wanted to sit down and talk with Gierlach. That seemed like a bad sign.

“Everyone was walking past the door of my room, like, ‘Oh my God, have you been outside? Did you see the eclipse? Whoa!’ and it was just like, all this surreal shit was happening,” Gierlach said. “And then, yeah, she came in and told me that I had cancer.”

Thanks to St. Elizabeth’s, Gierlach hasn’t paid a single bill for her cancer treatments. St. Elizabeth’s currently helps roughly 10 women in active treatment for breast cancer, and about 30 more who recently completed treatment and are still attending follow up appointments. It is home to the only Tucson breast cancer support group that consistently conducts meetings in Spanish.

St. Elizabeth’s as a whole was founded by a group of Our Lady of Victory Noll Missionary Sisters, along with a group of doctors, in 1961. Sister Eileen Mahoney started the breast cancer treatment and awareness program in 1999, lobbying for state funding to screen and treat women. In those early years, all they could really promise patients was that they would offer companionship on the journey for as long as the patient wanted it, and to work hard to find the resources to offer help. Over time, they’ve become a place where people come when they have nowhere else to go, or when half a dozen other places have already turned them away.

“For years, I would just see the door open in here, and one of our patients coming through accompanied by someone, and crying, saying, ‘I have cancer. Somebody said if I come here, you might help,’” Sister Eileen said.

Many of the patients who come to St. Elizabeth’s are low-income and often transient. No one at the clinic asks patients about their immigration status, most of the employees speak Spanish and many of their materials are available in Spanish as well. Though they are a faith-based organization, they serve patients regardless of religious affiliation.

The very fact that their patients are uninsured and underserved means that the cases St. Elizabeth’s treats are often complicated. It turns out Gierlach’s hesitation about getting her lump examined isn’t uncommon, and in fact her delay was relatively small. Cravens said one recent patient came in with a 12 cm breast mass—about the size of a baby’s head, or bigger—under her arm. The patient told Cravens she’d first noticed it about two weeks ago, which was pretty much impossible for Cravens to believe.

“When you’re uninsured, there’s a lot of fear about going to the doctor, finding something, so the denial of what’s going on in your body is pretty great,” she said. “A lot of times, people ignore what is happening to them for many years.”

Once they start treatment, patients sometimes have difficulty finding transportation to take them to appointments. In some cases, they don’t have access to a computer to check health information, or their cellphone minutes run out at the end of the month, making them hard to get ahold of. Cravens says the work is rewarding, but that she worries about her patients and finding more funding constantly. The clinic never knows how much it will cost to treat a patient, because every situation is unique—sometimes it’s a few thousand dollars. Sometimes it’s $50,000.

Once Gierlach was diagnosed, the game of pinball continued.

“Whether it was chemo, or another test, or shots, every day it was something,” McKinley said. “We would literally look at your schedule and be like, ‘OK, what are we doing today?’”

After an initial lumpectomy of what they thought was a slow-growing cancer, a biopsy revealed it was more serious than the doctors had thought originally, the kind fed by estrogen and progesterone. They needed to move fast. An oncologist asked Gierlach if she had kids, if she wanted them. Gierlach had never thought she wanted them, but suddenly, faced with a “now or never” situation, she wasn’t sure anymore.

Then came several months of chemotherapy, followed by a decision between radiation or a double mastectomy. Gierlach opted for the double mastectomy, then had reconstruction surgery. St. Elizabeth’s paid for all of her medical bills, and connected Gierlach with the Breast and Cervical Cancer Treatment Program through AHCCCS, which paid for her reconstruction.

“I can’t stress enough how amazing St. Elizabeth’s was for me. It made such a hard thing doable,” Gierlach said, pausing and laughing before she adds, half ironically, “All around great experience.”

Gierlach has a good sense of humor—she jokes that during chemotherapy, she lost the hair all over her body except for her calves, the one place she wouldn’t have minded losing it. Before she found out she would keep her own nipples after reconstruction, she’d found a local tattoo artist who does realistic nipple tattoos. Now, she’s considering just getting a realistic nipple tattoo somewhere else on her body.

She—and McKinley—carry that same sense of gratitude and grace through even the most somber realizations. They think of themselves as poor, but not as poor as some people, and note that some women have to work through their treatment. They’re grateful they’ve had the support of friends and the community. Others are even less lucky.

Brian and Nancy Jackson, donors to St. Elizabeth’s through their charitable foundation, have a similar attitude. When Nancy went through breast cancer nearly a decade ago, they were flung into the pinball machine, too. Brian said the process was challenging to navigate even though he had excellent corporate insurance. The work St. Elizabeth’s is doing resonates with the couple, and they especially appreciate how far the organization can stretch a dollar.

“Also important to us was the nondenominational, nonjudgmental way for women—no matter what their circumstance—to have really, the last line of defense to get treatment for a very serious disease,” Brian said.

They don’t like to mix politics and philanthropy, but he added one more thing that he appreciated about St. Elizabeth’s.

“Cancer doesn’t look for a green card. It doesn’t care what your ethnicity is, it doesn’t care about your demographic or your financial situation,” he said. “And at St. Elizabeth’s, they don’t check any of those boxes.”

Life hasn’t been the same since cancer. Gierlach’s hair is shorter, of course, and her breasts are different. She goes to an oncologist for monthly shots and she’s considering whether to have her ovaries removed. But it’s more than that. There’s always the lingering fear of relapse. After spending years learning to feel comfortable in her own skin, her own skin is different now.

“It’s like you’re supposed to just get back to your life, but you’re also dealing with all these new things that you’re trying to figure out with your body, and your brain,” Gierlach said. “Mentally and emotionally, I’m still catching up.”

As she was finishing up chemotherapy, she and McKinley decided they needed to do something new. McKinley is a trained botanist, and Gierlach’s dad, Peter Gierlach, perhaps best known to many Tucsonans as KXCI’s Petey Mesquitey, had started a nursery when she was a kid, so she grew up cutting plants with him. In 2018, her dad was mostly selling plants at Bisbee farmers markets. Maybe it was time, Gierlach joked, to get “back to our roots.”

They decided to launch a Tucson branch of Spadefoot Nursery, carrying on and cultivating the family business. Two months after Gierlach finished up chemotherapy, they held the first sale for Spadefoot Nursery at the popup market Cultivate Tucson. They’ve been up and running with a physical location since July 2019.

So their little nursery of native grasses started growing just as Gierlach’s hair started growing back. And they’re promoting the value of homegrown food and native plant preservation in a time where finding something beautiful to hold on to and support feels more important than ever.

“It’s like the one area that you can kind of have control and make it your own little paradise,” Gierlach said.

Donations to directly to St. Elizabeth’s, or to Tucson Riders 4 the Cure, the El Tour Team that supports them, can be made at saintehc.com.