After hearing the distressing story of a mother desperate to conceive children only to find out the artificial insemination treatments she received were sourced from the very doctor she entrusted to provide her sperm from an anonymous donor, Arizona Sen. Victoria Steele (D-Tucson) decided to use her position of power to help other victims.

When Kristen Finlayson took an Ancestry DNA kit in 2019, her mother, Debra Guilmette, discovered that Dr. James Blute III, who provided her fertility treatments in the ’80s, used his own sperm to inseminate her instead of using sperm from an anonymous Hispanic donor as she requested.

Finlayson went 34 years believing she was of Hispanic descent, only to find out the DNA test results showed she had no Hispanic DNA and was primarily Irish. The Ancestry site shows that Finlayson has 12 half-siblings, including children of the doctor who delivered her.

A tests revealed that Blute is her biological father.

Steele saw the story, first reported by Lupita Murillo of KVOA News 4 Tucson, and drafted a bill that would make fertility fraud a criminal offense in Arizona as it is in California, Indiana and Texas.

Steele introduced the bill before the 2021 state legislative session began, but her bill was never assigned to a committee.

“I requested a meeting with [Senate President Karen Fann], I said I'd like to see her because I want to ask her to please reconsider, and please assign this to a committee so it can get a hearing,” Steele said. “I think that she may be thinking that this is a controversial bill, but I think that actually, I put a bill up here that everybody can get behind, and we could have a real bipartisan bill . . . I assumed that in a few days, it would be assigned to a committee because she would look at it, and in her heart of hearts, she would get that this really does make sense.”

On Jan. 20, Steele found out a bill criminalizing fertility fraud did make it to a committee to be voted on, but it was not hers.

Sen. Nancy Barto, R-Phoenix, had introduced a similar bill that would make fertility fraud a criminal offense. It was assigned to the Senate Judiciary Committee on Jan. 20.

“I was floored. I knew [Barto] would like it, but I didn't know she'd like it that much,” Steele said. “It's not against the rules, and so she has every right to take my bill and put it in and take credit for it. It doesn't matter, as long as the bill gets passed. But it does matter because that kind of highly unethical behavior makes it really difficult to have bipartisanship, and it's really difficult to get good bills to pass.”

Barto said she never knew about Steele’s bill, but that she was contacted by a constituent who had a story of fertility fraud and felt moved to draft legislation to criminalize the act. 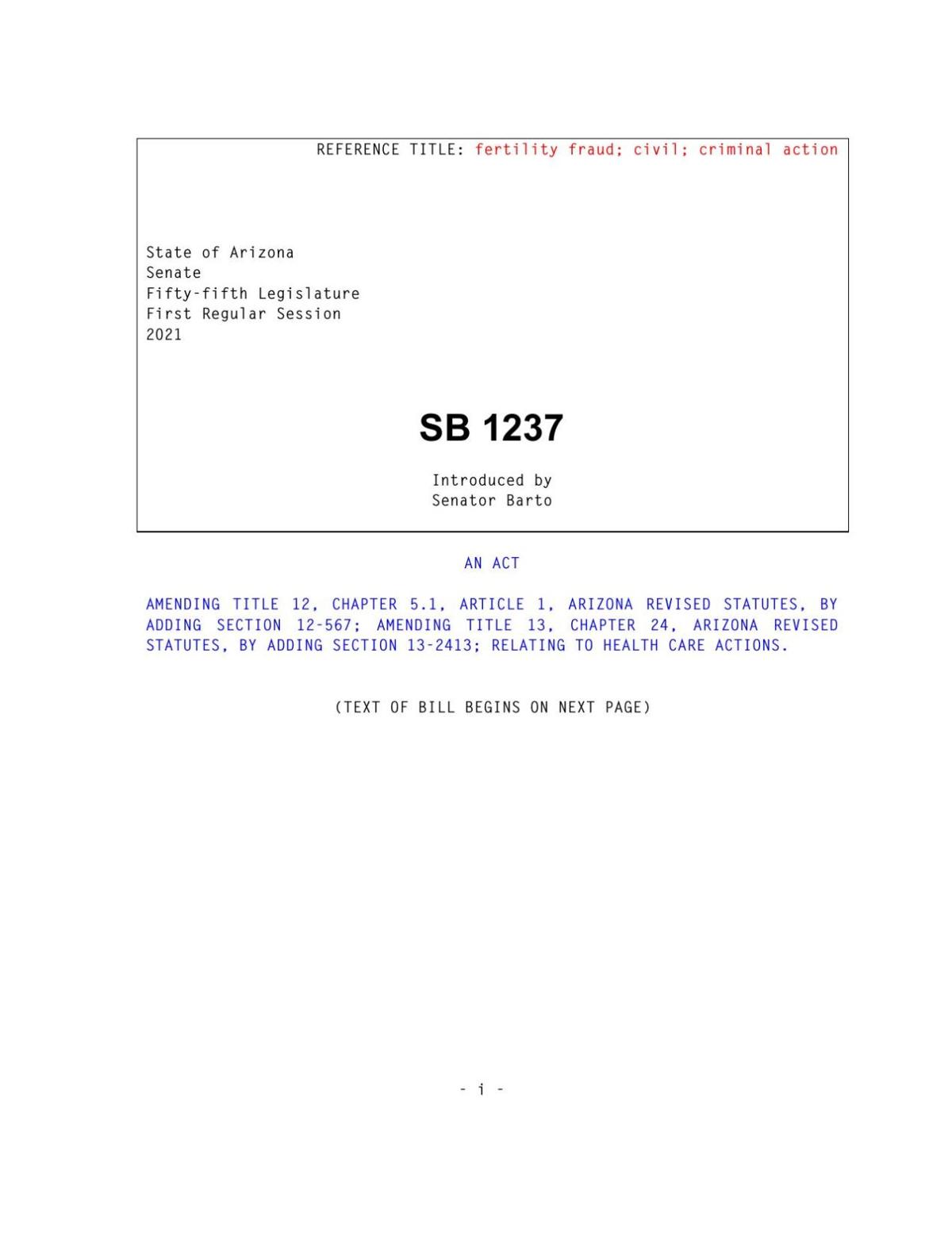 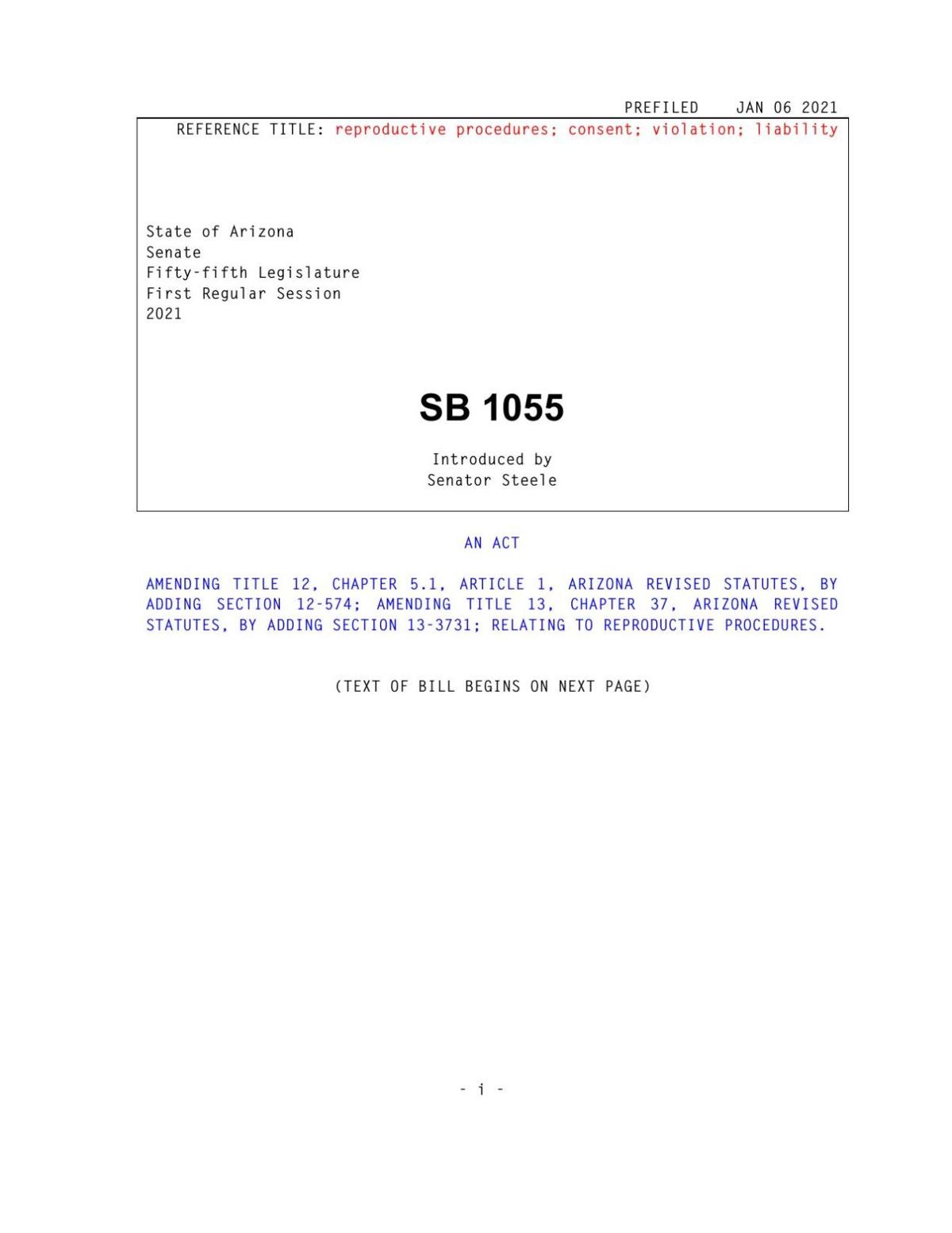 Once Barto’s bill made it to a Senate committee, Finlayson was approached to testify about her experience.

After she shared her heartfelt story of betrayal, Sen. Warren Petersen, R-Gilbert, chairman of the Senate Judiciary Committee, called for the bill to be amended to remove the language that would make fraudulent fertility treatments a felony.

“I thought at that moment, I was testifying for the criminal aspect of the bill to be passed. I didn't know that was taken off,” Finlayson said. “I was pissed. That’s the most important aspect of the bill, for someone to be held criminally responsible for rape. My mom didn’t consent.”

The amended version of the bill passed the Senate Judiciary Committee without dissent on Feb. 11. The new bill would hold doctors who provide artificial insemination treatments without the truth of the sperm’s origin liable for civil damages.

It lays out specific civil actions for victims of such crimes to seek damages against the doctors who deceived them, allowing them to receive relief of at least $10,000 in damages.

The civil actions could be brought forth by the woman who gave birth, her spouse or the children born as a result of a doctor’s fraud.

The civil charges would have to be brought forth within 20 years of the procedure or 10 years after the 18th birthday of the child.

But there’s nothing stopping victims from filing civil claims against doctors who impregnate patients through fertility treatments without consent. In fact, Finlayson and her mother Guilmette are in active civil ligation against Blute in Pima County Superior Court.

Blute has another case pending for artificially inseminating women with his own sperm under the guise of a separate sperm donor.

While Barto said her preference was to make fertility fraud a criminal offense, in order to move the bill forward, she had to be willing to negotiate.

“That’s the process of legislation. In order to move bills along you need to work with everybody and their feelings about how things should be held whether criminal or civil. [Peterson] had strong feelings about that,” Barto said. “In order to move the bill forward, we had to compromise and make it a civil penalty instead, it could still be quite significant, it can still be quite impactful to a doctor. So you know, I wasn't about to complain, because I think we were making definite progress in holding physicians accountable to informed consent.”

On Feb. 22, 29 state senators voted to pass the bill with one member not voting. It’s since been sent to the House for a vote.

Meanwhile, victims like Finlayson believe the bill falls far short of the justice the victims of doctors who deceive their patients deserve.

“What if this happened to your daughter? If she went in and was in a position that my mother was in, and the doctor did this to her, now his grandson or granddaughter is now part of this doctor's deception?” she said. “I don't think they put themselves in other people's positions. They don't care—I'm not saying all of them. Just try to put yourself in our position.”

Barto said the amendments of the bill she introduced are a consequence of the legislative process, and while fertility fraud perpetrators may not be held criminally accountable, the consequences the bill lays out in civil liability are the best of a bad situation.

“I just really feel for anyone that's gone through this. I think there's a lot of consideration for those feelings and wanting to take the most hardline stance and measures against that activity towards them. You know, I can certainly understand that,” Barto said. “But if we're going to move forward, we have to work together, and that's how legislation works. Otherwise, it would have died and then we'd have nothing.”