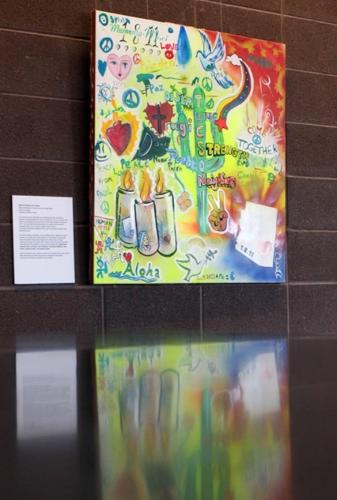 Piece of Peace for Tucson, created by Melo Dominguex and Tucson community members, is one of the art pieces on display at The University of Arizona Medical Center’s Behavioral Health Pavilion Gallery. The gallery is entitled Healing in Tucson. 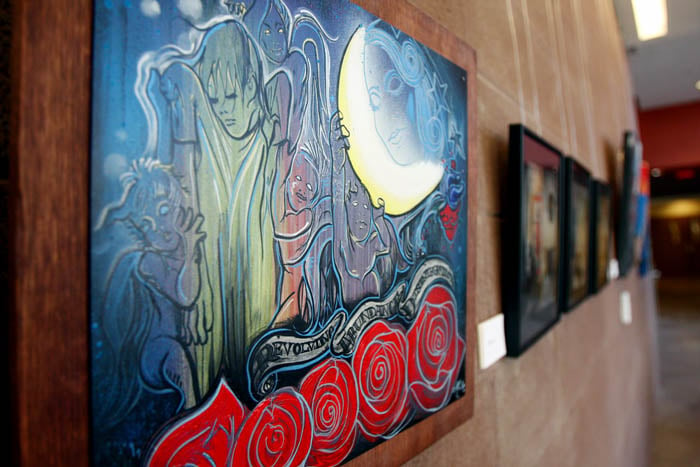 Numerous artists have contributed to the Healing in Tucson gallery in the wake of the shooting on Jan. 8 last year.

Piece of Peace for Tucson, created by Melo Dominguex and Tucson community members, is one of the art pieces on display at The University of Arizona Medical Center’s Behavioral Health Pavilion Gallery. The gallery is entitled Healing in Tucson.

Numerous artists have contributed to the Healing in Tucson gallery in the wake of the shooting on Jan. 8 last year.

In remembrance of the Jan. 8 shootings, in early December the University of Arizona Medical Center opened the art exhibit, Healing In Tucson – The Healing Response to the Violence of January 8, 2011, at its south campus.

Located in the Behavioral Health Pavilion Galley, the exhibit features works by Tucson artists and residents, all of which are expressions of how they have coped with the shooting over the past year.

Paintings of both familiar icons and unknown images occupy the space, incorporating a range of moods and mediums.

A painting by a local mother, Carolyn Anne Anderson, entitled Let This Be a Bridge depicts her response to Jan. 8 through the representation of an Arizona state flag. In the spaces painted dark blue are words, images and symbols regarding the violence of that day. However, positive words like “peace,” “hope” and “acceptance” exist in the red paint and radiate through white sunbeams.

Next to this painting is her own description of the healing process.

“That night, especially as a mom with young children, I was struck with a flood of emotions,” reads the plaque. “This painting began as my own way of sorting things out in the days immediately following.”

Another painting that stands out on display is one that several Tucsonans, including local artist Melo Dominguez, created. Earlier this year on Jan. 29, Borealis Arts, Bohemia and Pop-Cycle Shop hosted the Piece of Peace for Tucson benefit to honor the victims and celebrate the survivors of the shooting.

During the event, Borealis owner Nathan Saxton, presented a blank canvas on an easel, and invited attendees to partake in the creation of artwork that could express the community’s unification through this tragic event.

After the benefit, this community piece was handed over to Dominguez who finished it by integrating what each community member had added to the canvas. The work was then sold, and currently hangs in the Behavioral Health Pavilion Gallery.

Another of Dominguez’s paintings, Mother’s Prayer, also exists on display at the exhibit. When asked about the artistic process between this painting and the communal work, she said they exemplify many distinctions.

“The Borealis painting was definitely different because the community was involved. A lot of people couldn’t put what they felt into words, yet they wanted to embrace the survivors. I was excited because I love to paint, and I probably won’t be able to ever meet Gabby Giffords, but I want her to know of my support,” said Dominguez.

Mother’s Prayer is not Dominguez’s direct response to the Jan. 8 tragedy. It actually represents her own skirmish with death when her pancreas burst last year.

She said her own near-death experience allowed her to relate with the victims of Jan. 8, and her painting reflects this new understanding.

“I learned that if there’s positive reinforcement you can recover,” said Dominguez. “As a community we can do this for each other, we can change things. I just hope people know that there are positive results from coming together.”

The behavioral arts department has an expressive arts committee that was in charge of organizing the exhibit. They sent out a prospectus to the community, reviewed submissions and made selections. After months of planning, the exhibit debuted on Dec. 1 with a reception featuring live music and refreshments.

According to manager of community relations Christina Myren, around 50 people attended.

“This is a new building that recently opened and the pavilion on its own can be quite empty,” said Myren. “The artwork has made the pavilion become a welcoming space, and visitors, guests and out care treatment patients all seem to enjoy it.”