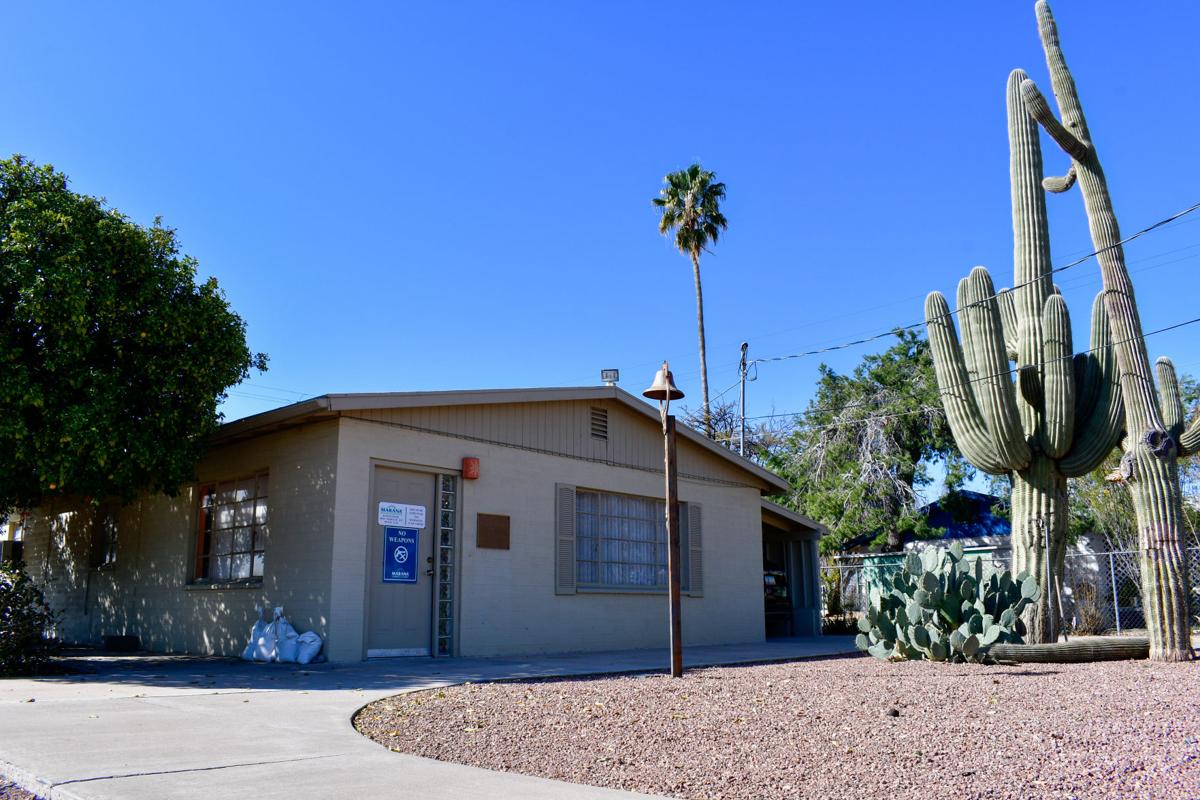 The current site of the Marana Chamber, located at 13881 N. Casa Grande Highway.

A conceptual design of the Marana Chamber and visitor center’s new location at the municipal complex.

The building, located at 13250 N. Lon Adams Road, is currently occupied by the Marana Parks and Recreation Department. That group is expected to move into their new space across the parking lot at the Marana Municipal Complex next month.

Town staff presented the council with design plans for the renovation that are currently 30 percent completed. Town Manager Jamsheed Mehta said the building needs ADA-compatible restrooms, a new kitchen and break room and replacement of ceiling tiles that are currently in bad condition.

Marana Chamber President and CEO Audra Winters told Tucson Local Media that the new space would offer them a larger area to expand the visitor center, which they operate for the Town of Marana.

“It also gives us a larger area for the chamber of commerce [to] actually have a board room and training room that we can use to host meetings,” Winters said. “We’ll also be able to let other members of the chamber use it and also community members, if they want to rent it out.”

She anticipates the meeting room will have space for about 50 people.

The council previously designated $200,000 toward finding a location for the new visitor center. Mehta said it is possible they will not need to use the full $500,000, and any amount they don’t use will simply stay in the bank.

At the council meeting, Mayor Ed Honea explained that years ago the town bought the chamber’s current building—located at 13881 N. Casa Grande Highway—for $85,000, and gave the building to the chamber after five years of their operation.

He expressed an interest in waiting until the chamber sells their current building, and then have them contribute up to $25,000 for the new entrance and landscaping work.

Honea noted that all entrances to town buildings face inward, which can be confusing for visitors.

Council member Dave Bowen said early on in the meeting that an entrance next to Lon Adams Road would be “welcoming” to the community and outside visitors.

“It sets the building up for current and future use much better than leaving the entrance on the [other] side,” he said.

Mehta said the chamber will enter a lease with the Town of Marana in about a month and pay for the use of their portion of the town-owned building. The other half of the building is planned for town staff to occupy office space.

But Honea and council member Roxanne Ziegler took issue with the idea of town staff working in the same building as the chamber. They said it should be solely chamber-occupied.

“It’s a loss of independence,” Honea said. “They really are not the Town of Marana, they are the Marana Chamber of Commerce.”

Winters said the other side of the building has potential for more community-related meetings and events that their current space cannot accommodate.

“We’ve outgrown it, and like with everything in Marana, our chamber is growing, so we need a larger space,” Winters said. “We host several different committee meetings, we also see the need of a lot of people work from home now or run home-based businesses, offering them the space to come and host their own meetings, or if they need to do one-on-one or whatever it may be. So, offering some co-working space too.”

Council member Patti Comerford voiced strong opinions about the project in general. She said the cost was supposed to remain at $200,000 and she criticized the staff for not providing information about the project when she previously requested it.

“Maybe this staff is not getting the general idea of this council, but I don’t think it includes an open checkbook,” she said. “I have no faith and no trust right now in the way it’s going.”

She compared the staff’s conduct to a “boat with drunk sailors” and claimed they were carelessly spending money. She pointed to $73,000 used for design plans (produced by Mesa-based Emc2 Group Architects) as evidence and questioned why the town staff couldn’t produce those plans in-house.

Comerford also questioned why other council members chose the parks and recreation building as the new home of the chamber, saying it was a “dilapidated” building, and they could have built a new building on their own for $500,000.

“We can’t turn our backs now, we’ve made all these promises, and if we do it, we’re the bad guys,” she said.

Comerford said the discussion about transforming the building into the new chamber headquarters has been ongoing since January 2018. She criticized the staff for bringing these new price figures to the council two years later.

After engaging in a heated back-and-forth exchange with Mehta over specifics of the plan timeline, Comerford said she was “done” and abruptly left the meeting.

The remaining council members continued discussing the project details and voted unanimously to approve the plans for a new entrance on Lon Adams Road and related landscaping work.