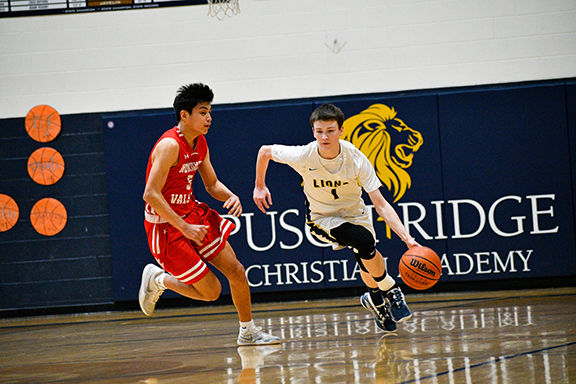 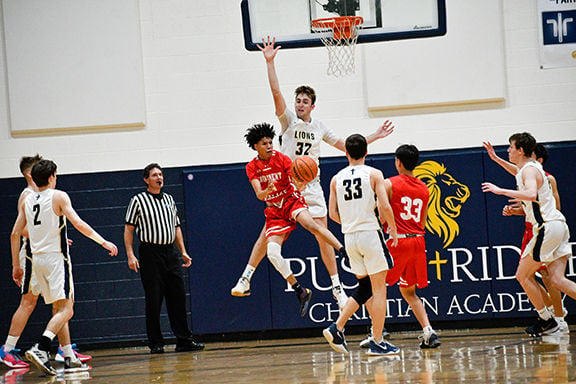 Just a few days earlier, the Lions pounced on the Monument Valley Mustangs by 11 points during the Feb. 19 3A Division State Basketball playoff opener. Pusch Ridge is ranked No.2 in the 3A South and Mountain Valley is No. 3 in the 3A North.

From the start, the Lions (13-6) dominated the Mustangs (7-11) as Pusch Ridge sophomore small-forward Kannon Jewell knocked back their first board only 20 seconds into the first quarter while the rest of the team scored 11 points before the Mountain Valley could find a shot.

“I just knew we were going to come out and fight,” Jewell said. “Everyone brings energy and it was a playoff game. We were ready for them.”

Emotions ran high less than three minutes into the first quarter after Monument Valley coach Rich Beverly was called for a technical foul during an argument with a referee over a previous foul called on the Mustangs.

Pusch Ridge senior forward Kyle Houseman closed out the first quarter with a clean three point shot at the buzzer to bring the tally up to 23-10 in the Lions’ favor.

The second quarter started even uglier for Monument Valley, as Pusch Ridge’s McKone cleanly stripped the ball out of hands of Mountain Valley freshman forward Albrandon ByJoe and then dished it to Lions senior guard Breckin Kleinsasser for two-points in the first 10 seconds of play.

Pusch Ridge senior center Scott Bumb shocked the crowd with a big slam dunk after being set up by junior forward Tanner Rozen, who also knocked back a three-pointer before Bumb’s dunk.

“I knew when Tanner grabbed the ball at mid-court and tossed it up, it was going to be a banger,” Bumb said. “So I had to get there and put it up.”

Mountain Valley came out fighting in the third quarter, scoring 12 points and holding Pusch Ridge to only 10. Throughout the rest of the second half, the Mustangs did all they could to rally, even getting within 10 points of Pusch Ridge by the last 50 seconds of play—the closest they came all night to shoring up the score.

However, it wasn’t enough as the Lions’ Rozen drained three three-pointers as Bumb swatted away at least two attempts by the Mustangs to score during the fourth quarter. While it was clear Mountain Valley was a good team trying hard to overcome the deficit, they were outsized by the boys of Pusch Ridge.

“It’s helpful being tall and having a long wing-span against these shorter teams,” Bumb said. “I think we dipped in the 3rd quarter, they outscored us. But at the end of the day we came out with the win.