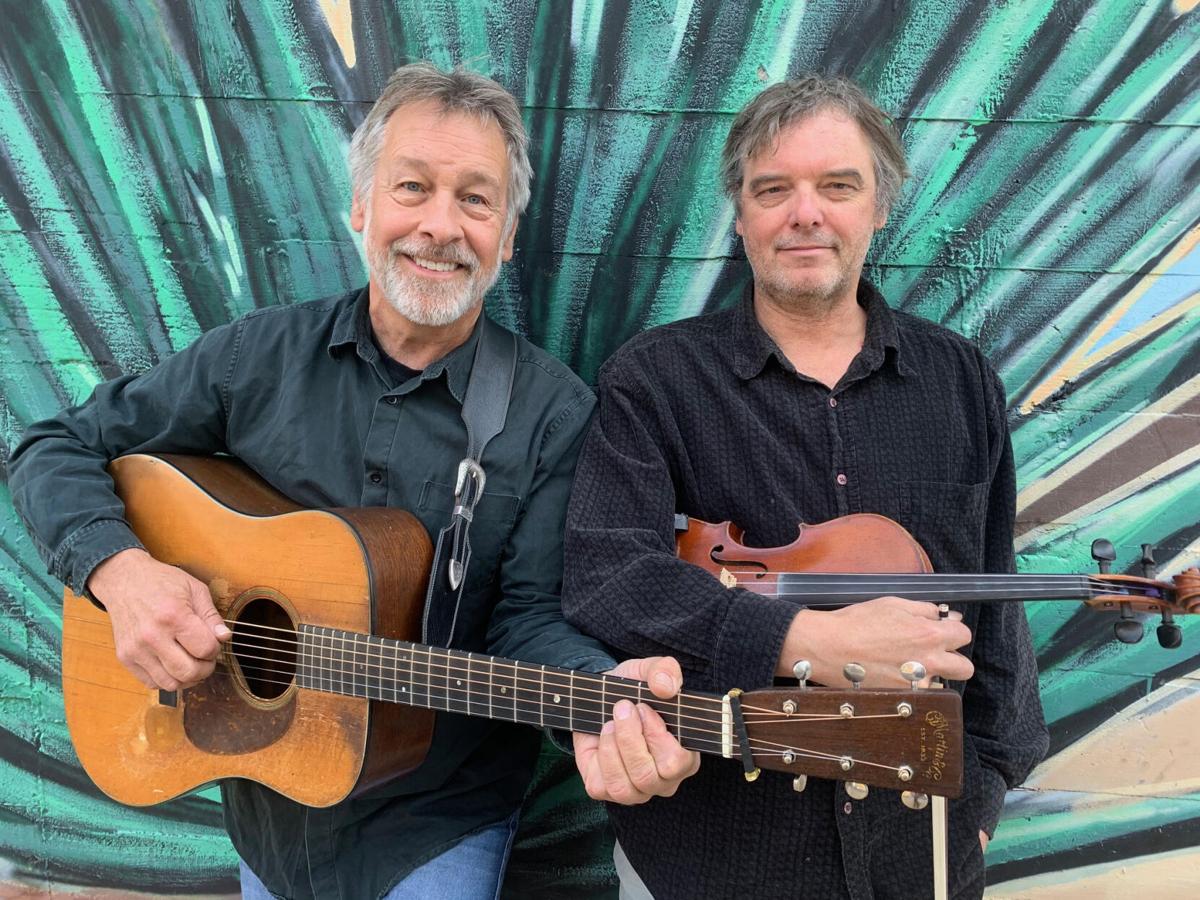 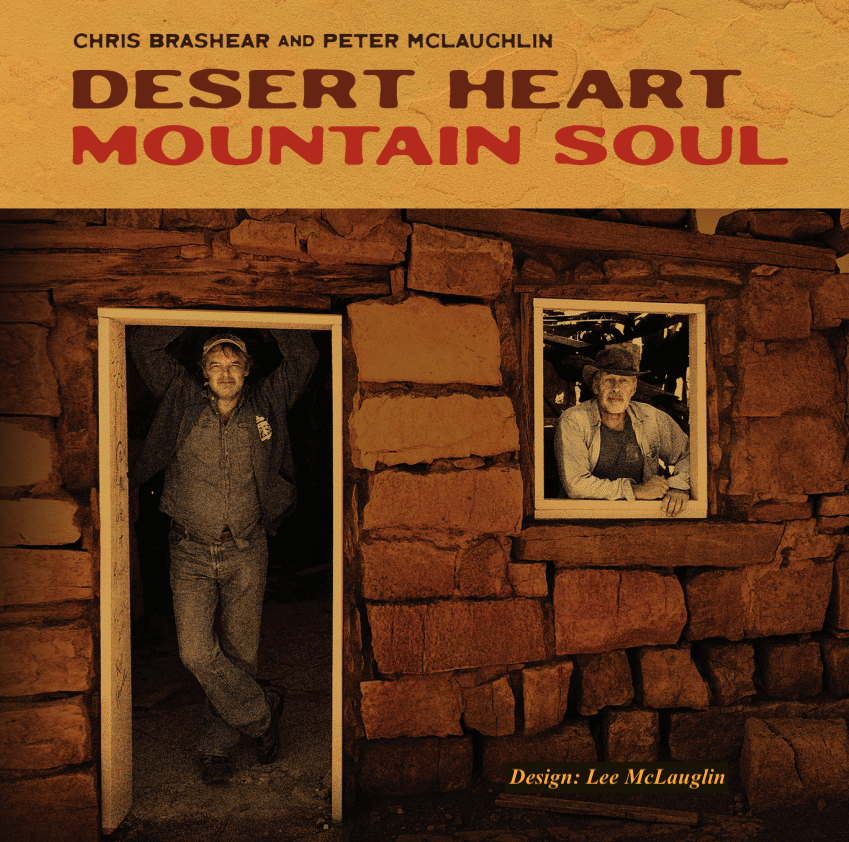 Bluegrass music hails from the rolling hills of Kentucky, but fans of Chris Brashear and Peter McLaughlin know the musical style fits quite well between saguaros and canyon walls. The duo’s latest collaboration, “Desert Heart, Mountain Soul,” combines a variety of rustic and lonesome songs into a musical map of the American Southwest: creosote, pastures, borderlands and all.

The pair have performed together since the early ’90s, blending a variety of ballads that fit beneath the Americana label. McLaughlin is a guitarist and singer who moved to Tucson in the ‘80s, performing in several folk festivals and fronting The Sonoran Dogs. Brashear, who records on the guitar, fiddle, mandolin and more, met McLaughlin when he moved to Tucson in 1992.

In 2016, through a Museum of Northern Arizona artist residency, Brashear and McLaughlin recorded an album celebrating the Colorado plateau. A follow-up of sorts, “Desert Heart, Mountain Soul,” expands its view both thematically and compositionally, and was co-written with songwriter and performer Mark “Brink” Brinkman.

“That particular project, there was a specific motivation to write songs about the Colorado plateau. There was a much more direct focus to that recording,” Brashear said. “‘Desert Heart, Mountain Soul’ didn’t have that kind of primary focus and I’d say was much more loose. We weren’t trying to fit anything into one small box.”

Beyond its varied lyrical themes, “Desert Heart, Mountain Soul” also includes covers of American folk icons like Woody Guthrie and Kate Wolf. Songs like “Take Me Back Where I Was Born” and “Another Trip Around the Sun” are more somber reflections of time’s passing, but much of the album is warm, pastoral songs celebrating the history and landscape of Arizona.

“We really haven’t done a lot of co-writing. Usually Peter comes up with ideas and I come up with ideas and we try to fulfill each other’s vision as much as we can,” Brashear said. “In our very nature and upbringing we probably bring some of that high, lonesome quality. We like that in music anyway. So I don’t know if the pandemic specifically has changed our sensibilities about what we bring to lyrics and songs, but we’ve also had this very specific Southwest bent. So there’s other things like geography and culture coming into our songs, as opposed to what is just thought of as Appalachian mountain music.”

McLaughlin says they are both heavily influenced by the outdoors in their songwriting, and often explore the Southwestern nature together. Adoration of the wilderness is clear in the title track, which decries city living and expresses a willingness to escape into a desert landscape: “The cactus blooms, the coyotes cry, the Colorado rolls / A full moon over the mesa is a wonder to behold.”

“I think Chris and I have similar styles, even though our playing and singing is different. We both write about what we’ve seen and done, and the places we’ve been,” McLaughlin said. “Whenever I go out on one of my off-weekends to go hiking or camping or backpacking, I take it all in and that’s where I get a lot of my songs from. It makes me happy I can get away from city life. I think a lot of the songs talk about that because this past year, especially with not having a lot of gigs, I was able to explore some wilderness areas I had no idea were so spectacular. That was one of the bright sides from the COVID year. I had all this time to get out into the backwoods and canyons and mountains.”

Although the album was recorded during the pandemic, its songs feature a vast and warm atmosphere. Brashear and McLaughlin managed to maintain this even during isolated recording sessions at A Writer’s Room in Tucson. Guest musicians like Alvin Blaine, Duncan Stitt and Chris Haynes further defined the landscape via added layers of dobro, pedal steel guitar, piano and accordion.

“This recording couldn’t be made with everybody in the room at the same time, so there was a question of how to keep things organic,” Brashear said. “Peter and I went in at the same time, we were in the same bubble anyway. So we could get the basic tracks done, then had other people come in. And I think the folks we had as guests were able to keep an organic feel, even when we were separated.”

“Desert Heart, Mountain Soul” also includes a cover of Alice Gerrard’s “You Gave Me A Song,” and features her singing harmony. McLaughlin says singing with Gerrard on her own song was the honor of the album.

“We wanted to do those songs because they cover the natural elements and wildlife. It’s very reflective of what our thoughts were for the whole project, a lot of outdoor imagery and wild places,” McLaughlin said. “When I think of writers like Kate Wolf and Woody Guthrie, they really captured the social issues and environmental issues in their songs, and that’s kind of what we seek for our

Though there is an emphasis on natural imagery and genre standbys, certain tracks tackle personal and political subjects, such as “21 On the Border,” where Brashear sings about border crossings. The calm, pained song examines identity and isolation in lyrics like: “As empty as the Gila south of Phoenix, on a dusty road where no one ever goes / I will work anywhere I will do anything, I don’t have a name and I ain’t got no papers / I’m all alone, yes all alone, in a wasteland that a free man never knows.”

“It’s not like the instrumentation on the record is complicated or too layered on top of each other, but we definitely are trying to capture a feeling with every song. So we pick instruments that lend themselves better to produce certain feelings or settings,” Brashear said. “It’s the same for ‘21 On the Border,’ I wanted it to have that feeling of norteño in there, so we have accordion and nylon-string guitars to help instrumentally produce a sonic picture in people’s minds.”

Brashear’s “The Day I Was Set Free” is a classic blues song filled with imagery of drunks, train cars and absent families. But the dusty guitar and drums are turned on their head with a tight performance and the ironic central theme of wanting to go back to prison after being released.

“I always listen back to my own recordings and overall am my own worst critic, but I think we really captured what we wanted here,” McLaughlin said.

by Chris Brashear and Peter McLaughlin