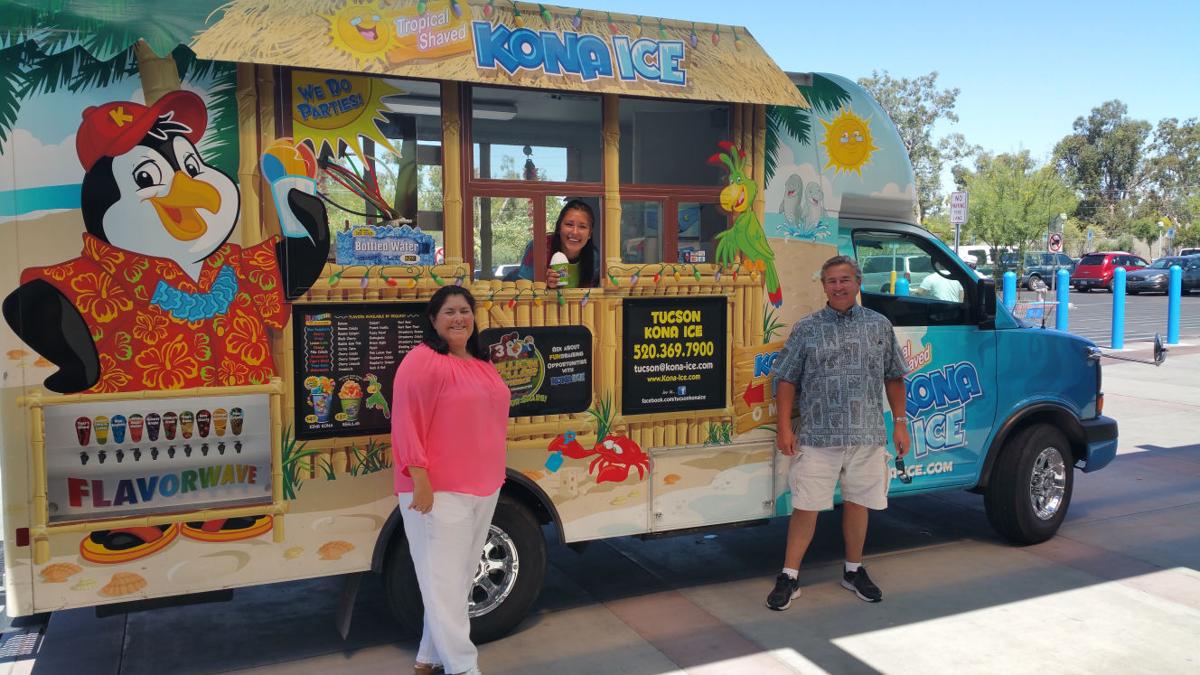 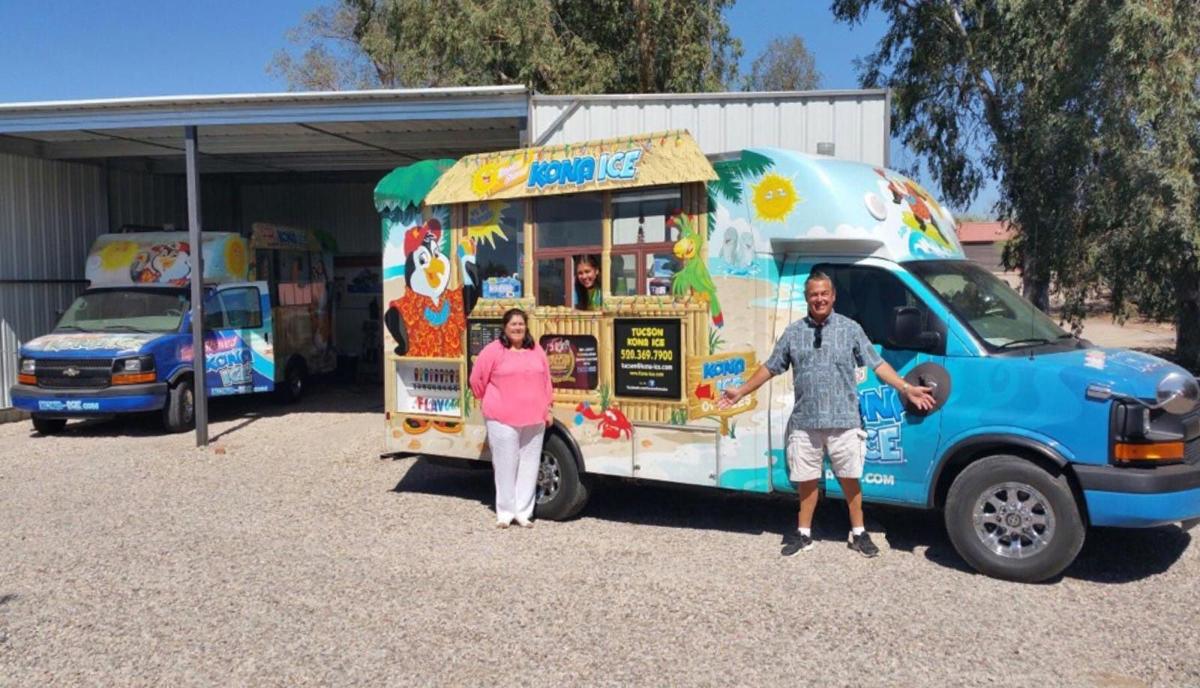 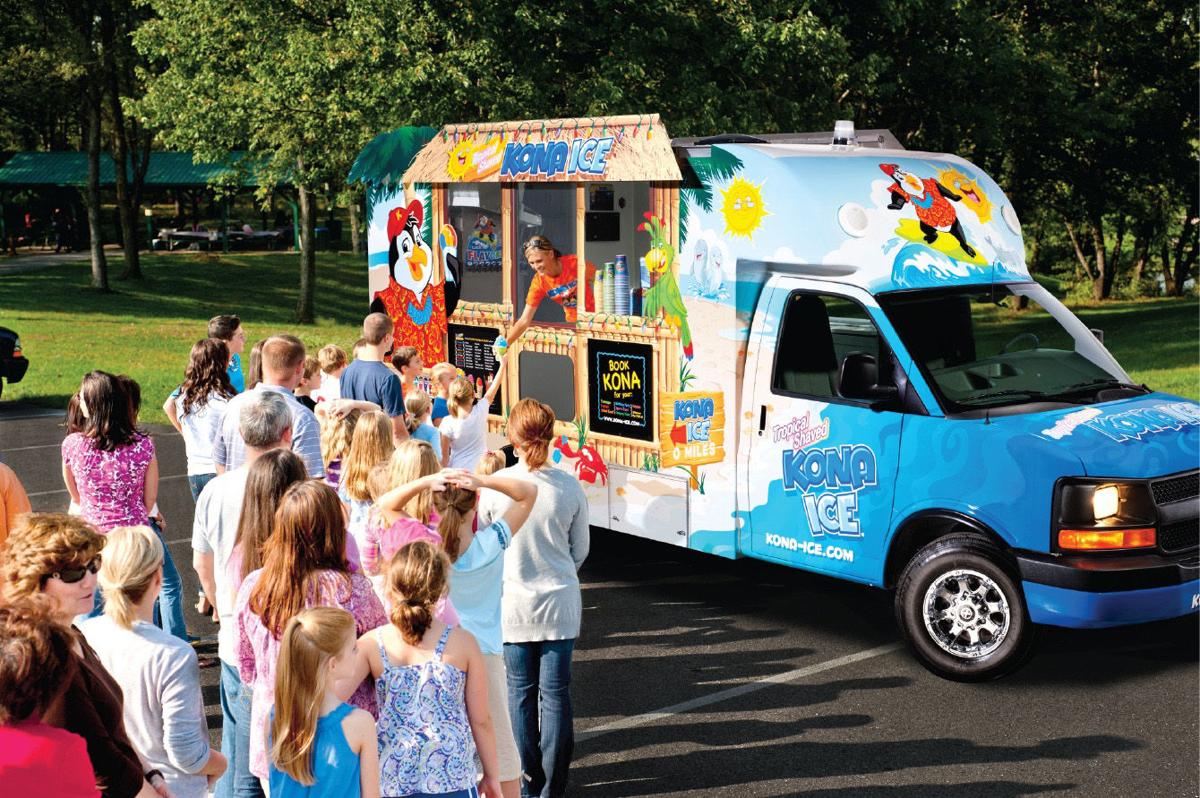 Triple digit temperatures have arrived, but there’s an increasingly popular way to enjoy an iced treat without the tablespoons of sugar that might leave you feeling cooler but guilty.

You may have seen the Kona Ice truck around town — its bright lights, tiki hut top and music a familiar presence at local sporting events, businesses, schools and fundraisers.

Married couple Chris and Karrie Reaney have been in the shaved ice business for about four years. Chris franchised out the first mobile ice truck, and later the couple added two more trucks to the tally.

Their increasing popularity is twofold: They offer a unique product, and they’re constantly involved in giving back to the community.

Unlike many iced treats, the Hawaiian shaved ice offered by Kona is of a much finer texture than say, a snow cone, and the sweetener Chris and Karrie use — Vitablend — uses Stevia and agave instead of refined sugar.

“A lot of parents who we identify with might think something like this has too much sugar, but we didn’t want to go that route,” said Karrie. “We decided we wanted a healthier alternative.”

Chris says 25 percent of the vitamins and minerals a child needs on a daily basis — including vitamins C and D, as well as antioxidants, are included in a cup of Kona Ice.

The Kona Ice truck is designed to be interactive, allowing customers to choose their own concoction from about 30 to 40 different flavors.

“We give them the cup of shaved ice, and they’re able to create their own flavor,” said Karrie. “If they want to mix flavors from the faucets they can do that as well.”

Just as well known as their product has become, so has the reputation of Chris and Karrie in the community. From their sales, they generally donate 20 to 30 percent to various organizations, helping fund such things as downtown’s Second Saturdays, Tucson youth sports, Movies in the Park, the Tucson Children’s Miracle Network and the list goes on and on.

“Everyone who buys their own franchise has their own idea of how they want to run it,” said Karrie. “We have both served on many charitable boards, so we are naturally big supporters of the community. It’s important to teach our next generation to give — give the hours but also, sometimes the money to support the various causes out there.”

Chris and Karrie, who both have full-time careers in addition to running the Kona Ice trucks, have so far this year given about $5,000 away, and have also offered a number of free shaved ice cones at various events.

Still, the success of their franchises has hinged on perseverance, particularly early on.

“One thing I tell people looking to get in, is it takes two to three years to get the critical mass to make money,” Chris said. “Don’t think this is something you can start tomorrow and make a ton of money — you have to take the time to train employees, build the clientele and schedule events.

“You have to put the time in to be successful.”

To schedule an event with Kona Ice, email Tucson@kona-ice.com.