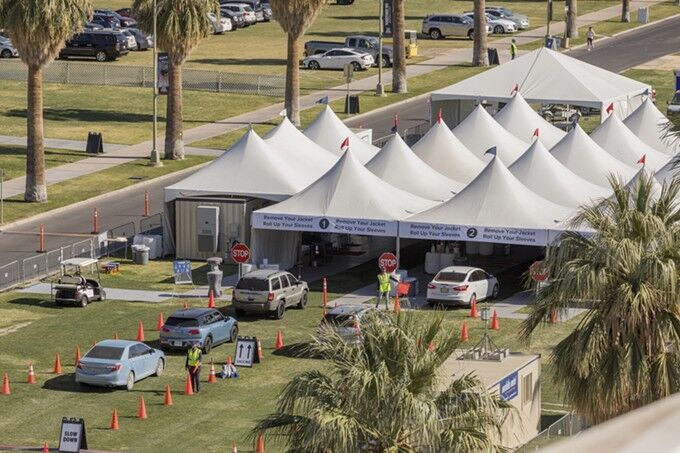 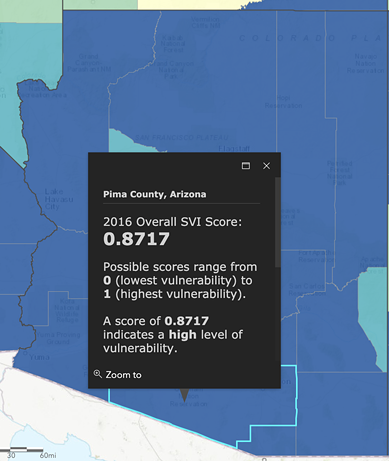 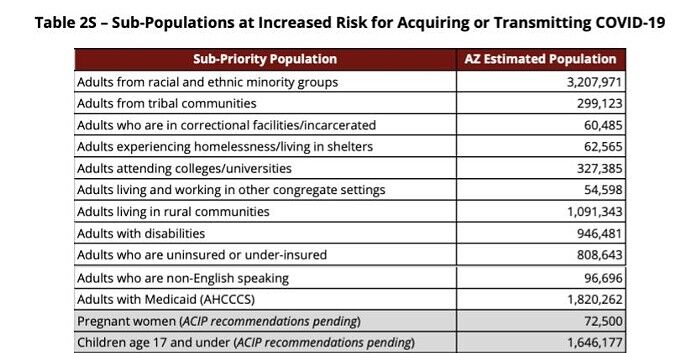 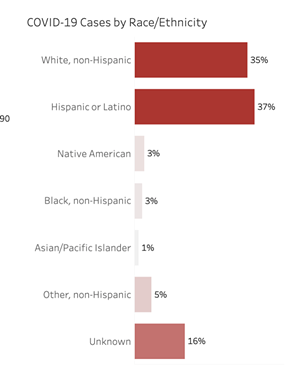 Pima County’s vaccine allocation from the state has been cut again, making it even more difficult to reach the populations who need it most.

The state is now controlling all Pfizer allocations with little insight into how many will be distributed to vaccinators. Additionally, vaccines given to Pima County’s new state-run POD at the University of Arizona are coming off the top of the county’s total allocation.

The UA POD will receive 2,000 Moderna vaccines this week, according to a Feb. 12 memo from County Administrator Chuck Huckelberry.

The county’s vaccination network can supply 8,000 vaccines a day, but doses from the state have averaged 3,600 a day, Huckelberry said.

In order to carefully manage a constrained vaccine supply that will reach the most vulnerable populations first, the county has adopted a new tiered approach as part of its accelerated vaccination plan.

Tier two represents vulnerable populations in terms of their age, ethnicity and low income. According to Huckelberry’s memo, this includes “communities with the highest rate of COVID-19 infection and mortality, those who live in HUD housing, those who are disabled, and those who live in census tracts with a high social vulnerability.”

The county is also relying on community health centers such as MHC Healthcare in Marana, United Community Health Centers and Desert Senita who run their own vaccinations to reach residents on the periphery of the county.

Tier three includes the second doses needed to provide complete immunization, tier four contains first doses for those 70 and older and others in the 1B priority group, tier five includes extending vaccinations to the 65+ population and tier six focuses on the state-operated site at UA.

Pima County’s limited vaccine supply will be distributed in this order, but the amount of available vaccine falls far behind the need for them, especially in vulnerable communities.

Long before the first case of COVID-19 was discovered in the United States, the CDC created a social vulnerability index (SVI) to determine which specific census tracts—or subdivisions of counties—would be most impacted by an emergency event, including a disease outbreak.

The index takes into account factors such as socioeconomic status, minority status and housing type.

The latest SVI map, created to help communities most at-risk groups in times of crisis, shows Pima County has an SVI score of 0.87. The scores range from 0 to 1, with a score of 1 indicating the most vulnerable.

The Arizona Department of Health Services’ most recent COVID-19 vaccination plan lists the populations most at risk for contracting COVID-19 based on their SVI, noting they should be “considered for sub-prioritization throughout all phases.”

These populations include racial and ethnic minority groups, rural populations, those enrolled in the state Medicaid system and those who don’t speak English.

But the state’s current vaccine distribution plan is making it difficult to reach these communities in Pima County, which has a high SVI— a factor ADHS claims it considers when allocating doses.

Pima County is using mobile vaccination events and utilizing community health centers to reach disadvantaged populations, but these efforts have been halted by this week’s reduced supply of vaccines.

On Feb. 6, the county piloted its first mobile vaccination clinic at St. John’s Evangelist Church and provided 511 vaccines to the targeted population. According to the memo, 72% of the doses went to Hispanic individuals.

Ethnic minorities and members of rural communities are some of the most at-risk populations when contracting COVID-19 for a variety of historical inequities that include a lack of access to healthcare.

Baruch Fischhoff, a psychologist at Carnegie Mellon who studies expert’s decision making, was part of the committee that wrote the “Framework for Equitable Allocation of COVID-19 Vaccine,” a report from the National Academies of Sciences, Engineering, and Medicine.

After a request from the CDC and the National Institutes of Health (NIH), the National Academies put together the report by a committee of health experts to inform policymakers on what priorities should be considered to ensure an equitable distribution of the vaccine.

In Pima County, ADHS data shows 37% of diagnosed COVID-19 cases have been in Hispanic or Latino residents. Pima County’s population is 38% Hispanic.

However, reaching these at-risk communities is a plight becoming significantly hindered by a lack of vaccine supply. While the state allocates vaccines to counties based on its estimate of the population eligible to receive them, they don’t seem to take into account other socioeconomic factors that may be greater in certain counties.

According to ADHS Director Dr. Cara Christ, the state uses data from the U.S. Census and Bureau of Labor Statistics and “other reliable sources” to estimate the number of healthcare workers, educators and childcare providers, protective services workers and those 65 and older—which comprise the qualifying groups the majority of counties are vaccinating.

When given its federal allocation, the state first deducts the first and second doses needed for the federal pharmacy program supplying vaccines to long-term care facilities.

The state then determines how many second doses each county needs to match the number of first doses they’ve administered. For Pfizer, they match first doses given three weeks ago, and for Moderna, the state matches doses given four weeks ago, according to Christ.

The number of first doses each county receives depends on its population of eligible recipients determined by the state. But as the state has acknowledged itself, certain populations are at an increased risk for contracting COVID-19.

The latest ADHS vaccination plan includes a map with the areas of the highest SVI scores based on four related areas: socioeconomics, housing composition and disability, racial and ethnic minority groups and housing and transportation.

“County health departments will utilize this map layer to identify communities that may have groups of socially vulnerable populations and need additional outreach and services,” the state vaccination plan says.

While the state health department puts some of the onus on counties to ensure vulnerable communities receive access to the vaccine, counties with higher populations of the socially vulnerable lack the vaccine to reach them.

“If the counties were otherwise equal in terms of the risk factors, then allocating according to the population would be ethically appropriate and efficient. But what if they're not? What if a county is particularly wealthy?” Fischhoff from the National Academies report said. “If the counties are different, then allocating according to population, per se, would violate these ethical principles.”

“I am making the case to [Health and Human Services] and the COVID-19 taskforce that considerations besides population should be considered in state allocations,” he said. “Arizona has been devastated by the pandemic and frequently ranked as one of the worst outbreaks in the country, if not the world. Things like infection rate, hospitalizations and disproportionate impacts on minority communities should get an enhanced response.”

After hearing of this week’s reduced supply, the county canceled its second mobile vaccination event that would have been held Feb. 13 at a location “designed to serve the African American community,” according to Huckelberry’s memo.

The county administrator said the county hopes to operate two mobile vaccination sites a week to reach disadvantaged communities, but it’s unclear if this will be possible with the current vaccine supply.

According to County Health Department Director Dr. Theresa Cullen, the next mobile vaccination site may launch on Feb. 20.

“The second approach to [the tiered plan] is really this vulnerable and disadvantaged population….We've been working on that for about the past month with the recognition that while shots in arms is what matters, what really matters at the end of this is that we make sure we try to address and improve the inequities that have historically existed not only in our communities but throughout the nation,” Cullen said. “What we do envision is making another clinic scheduled for a week from this Saturday, (Feb. 20), and continuing to work with this population to make sure we get vaccine delivered at the point of care.”

The county’s mobile vaccination efforts targeted a large population of those without computer access, who have a lack of transportation or who speak a different language than English.

Now that the county is having to cut back its mobile vaccine events, the disadvantaged populations who rely on them could experience even more difficulties in their attempts to receive a vaccine.

“A prime example is that right now, the online state registration for the vaccine is not available in Spanish. Another issue is internet access. We know those without access tend to be low-income and minority,” Grijalva said. “Those who got the initial doses of the vaccine were the more affluent populations that could watch for spots to open and register online. Without addressing these issues, we are adding a layer of discrimination to a health system already riddled with disparities.”

However, without the mobile vaccination centers that bring vaccines directly to vulnerable populations, internet access remains a key issue.

According to the latest census data, 84% of Arizonans have a broadband internet subscription.

“It's always been critical to reach minority populations, and I believe that Pima County understands that. We are seeing what decades of disparate health access creates. In order to have an equitable response to COVID in this nation, we must have an enhanced response to address the disparities,” Grijalva said. “Not only do we need to logistically get more vaccines into these areas, but we have to build confidence in the communities around the process itself—to assure it’s safe, effective and that they won’t suffer some form of retribution for receiving a vaccine. If we fail parts of our community, we will suffer as a whole. There is no place of politics in this response.”

Both Cullen and Huckelberry have expressed concerns that the addition of a state-run site at UA that’s set to operate Thursday could widen the vaccine disparity gap.

The existing state-run locations in Maricopa county—one at the State Farm Stadium in Glendale that opened on Jan. 11 and a second at the Phoenix Municipal Stadium that opened Feb. 1—had distributed 260,195 doses as of Tuesday.

Data released by ADHS shows 62% percent of vaccines at the PODs were given to white residents, while less than 4% were given to Hispanic or Latino residents. Maricopa County’s population is 31% Hispanic, while the entire state is 32% Hispanic, according to the latest census data. However, 29% of vaccine recipients’ ethnicities were marked as “unknown” at the state-run PODs.

While Pima County has distributed vaccines to community health centers and held pop-up vaccination events to reach less privileged populations, these groups could become more isolated if the UA POD follows the same trends as the ones in Maricopa.

“The concerning news is that I know that our large PODs, the state PODs...can contribute to that inequity. It behooves us and really requires us to figure out how to ensure that we are getting vaccine at the point of care to the population that is most at risk,” Cullen said. “Some of this is related to the time that PODs are open, some of it's related to the fact that it's a drive-thru, there's not a bus, you can't take Sun Tran and go through one of the PODs. So we, in a sense, automatically have created difficulties for certain subpopulations that we know are most at risk for morbidity and mortality...I worry about any large POD contributing to equity as opposed to ameliorating it.”