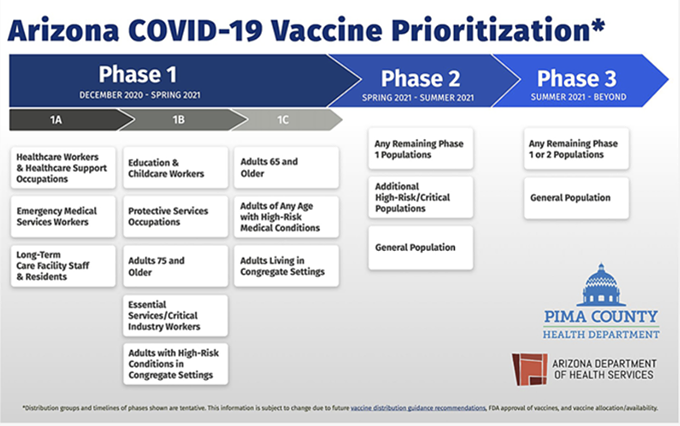 At a press conference on Jan. 8, Trujillo announced a registration website will go live Friday where TUSD employees can make an appointment to receive a vaccine at one of Pima County’s vaccination sites and schedule a follow up for a second dose 28 days later.

However, the Pima County Health Department has notified TUSD there may not be enough vaccine supply to vaccinate the hundreds of thousands who qualify for the vaccine in phase 1B, which includes prioritized essential workers in education and protective services, essential workers in fields like transportation and government, adults in congregate settings with high-risk medical conditions and individuals older than 75.

In its first week of vaccine implementation starting Jan. 18, the district could be limited to 100 to 200 vaccine appointments weekly for up to a month, Trujillo said.

“The Pima County Health Department's late Friday notification that it received a significantly limited supply of vaccines will not allow them to meet the aggressive targets that they had previously set of being able to vaccinate 2,000 to 3,000 group 1B individuals a day,” Trujillo said.

“So this compromises our efforts as a Tucson Unified community to make sure that all of our 1B employees can get vaccinated by the end of the month of February.”

TUSD has 7,458 staff members working both remotely and on-campus. According to a memorandum from County Administrator Chuck Huckelberry, 275,000 to 325,000 individuals qualify for group 1B of vaccine recipients.

Although Trujillo previously announced registration for TUSD employees to receive the vaccine will begin Friday, Stefan estimates it will likely be set after Jan. 18 instead.

When their turn to receive the vaccine comes, all school staff will receive it at a drive-thru site at the University of Arizona, according to Stefan.

Brian Eller, the COVID-19 school liaison for the Pima County Health Department, said the county’s vaccine allocation from the state has diminished to 12,000 a week. Those 75 and older will be the first to receive them.

On Friday, UA will have a “test open” day with the number of vaccines distributed depending on the “throughput that UA can accommodate on a weekly basis,” according to Eller.

The amount of vaccine each schools’ employees receive will depend on the number of staff members they have. Of all the educators in K-12 schools in the county, TUSD employs nearly 35% of them, Eller said.

“Every day, the UA will be able to get a set amount of people through vaccines at that site, we don't know what that number is going to look like until the 15th,” Eller said. “We'll allocate percentages out from there. In terms of distributing that percentage equitably amongst the various schools—there are privates, charters and all the other school districts that exist within Pima County—we're using your 1B staff totals to allocate that percentage equitably across the board.”

Although the amount of vaccine UA can provide on a daily basis is still unknown, K-12 schools will receive nearly 50% of them, Eller said. He estimated that nearly 53,000 educators will qualify under the 1B population.

When asked why the county is receiving such a limited amount of vaccine, Eller said he doesn’t know.