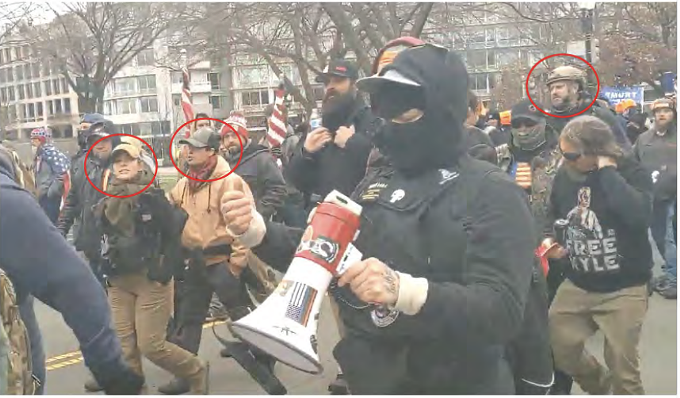 A group of known Proud Boys affiliates marching toward the Capitol grounds on Jan. 6. Tucson brother and sister Felicia and Cory Konold are circled on the left. 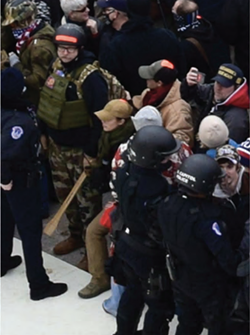 Felicia and Cory Konold at the front of a crowd who stormed the U.S. Captiol. 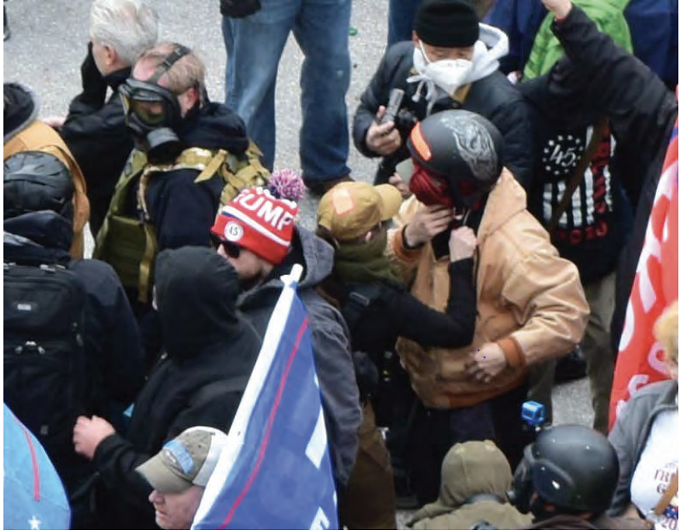 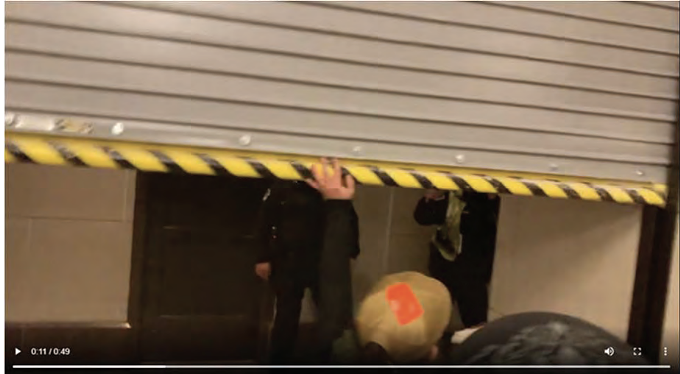 Felicia Konold attempts to hold up a metal barrier lowering to block underground tunnels at the U.S. Capitol.

A Tucson brother and sister have been arrested after evidence surfaced of the duo participating in the Jan. 6 storming of the U.S. Capitol.

Felicia and Cory Konold were listed on a criminal complaint filed by the FBI for their participation in the riot that resulted in five deaths as insurrectionists invaded the Capitol in attempts to stop the certification of the 2020 presidential election results.

Rioters broke into the Capitol at about 2 p.m., tearing down protective barriers, breaking windows and assaulting Capitol police.

In a Snapchat video, Felicia Konold of Tucson was seen brandishing a two-sided coin associated with the Proud Boys, a far-right extremist group known for supporting white nationalism, according to a complaint filed in the U.S. District Court on Feb. 10.

The video showed Felicia saying she had been "recruited into a f****** chapter from Kansas City” and that she’s "with them now."

The complaint said the Tucson woman was also seen in publicly available video marching with a group of known Proud Boy affiliates along Constitution Avenue chanting "F*** Antifa!" and "Whose streets? Our streets!"

At the Capitol, Felicia and her brother Cory were observed at the front of a crowd that advanced toward the pedestrian entrance shortly before 1 p.m., confronting police and eventually toppling metal barriers and moving toward the building.

After the insurrectionists overwhelmed the police line guarding the front plaza of Capitol, the brother and sister were at the front of the crowd where Felicia was seen putting a black helmet previously worn by another defendant on Cory’s head, the complaint describes.

Footage from inside the Capitol revealed Felicia attempting to hold up a metal barrier that was lowering to block off the entrance to tunnels underneath the building with her brother standing behind her.

In addition to video proof, the duo was identified at the Capitol riots through cell-site records, including a call made to Cory tracked from Felicia’s phone on Jan. 6.

In the Snapchat account affiliated with Felicia, the complaint says she recorded a “selfie-style” video saying “I never could have imagined having that much of an influence on the events that unfolded today…Dude, people were willing to follow.”

In the criminal complaint, the Konolds are included in a group of five that stormed the Capitol building and face federal charges of conspiracy, civil disorder, obstruction of an official proceeding, knowingly entering or remaining in any restricted building or grounds without lawful authority and disorderly conduct on Capitol grounds.