You have permission to edit this article.
Edit
Welcome, Guest
Home
News
Your Voice
Entertainment
Sports
Obituaries
Classifieds
Your Papers
1 of 5 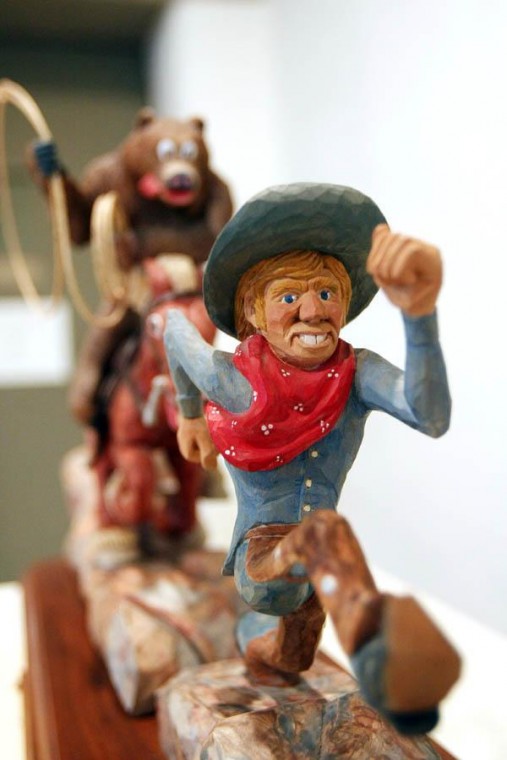 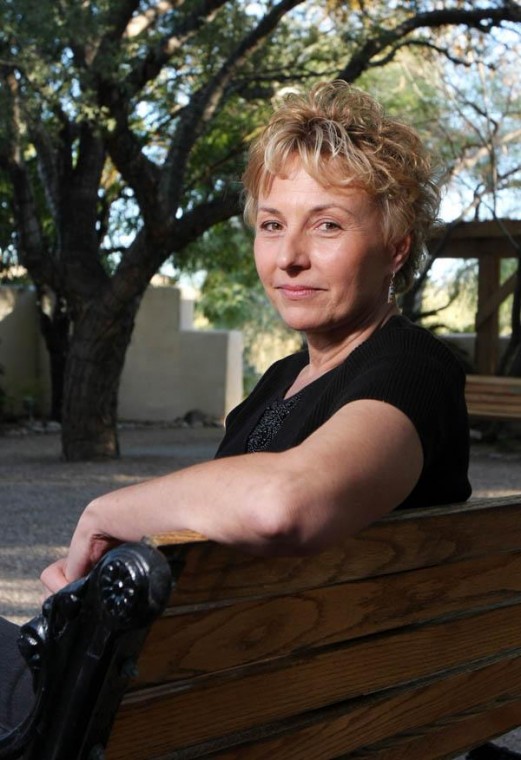 Randy Metcalf/The Explorer, Wendy Timm is one of many artists featured in Tohono Chul Park's exhibit on Arizona humor. 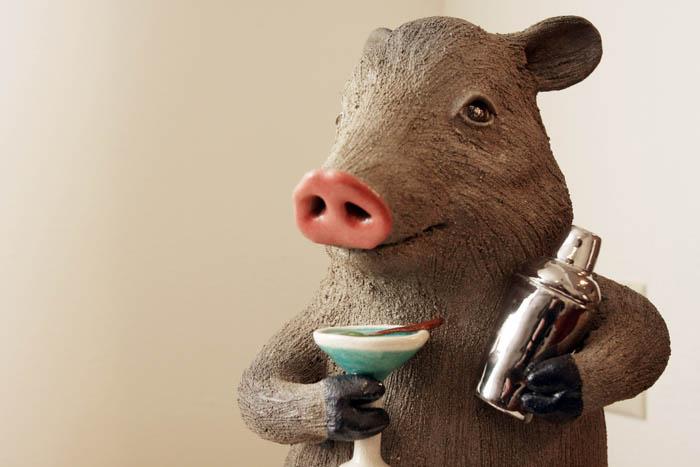 Randy Metcalf/The Explorer, According to artist Wendy Timm, a "javelini" is made with one-part vodka, a whisker of vermouth, and one javelina. 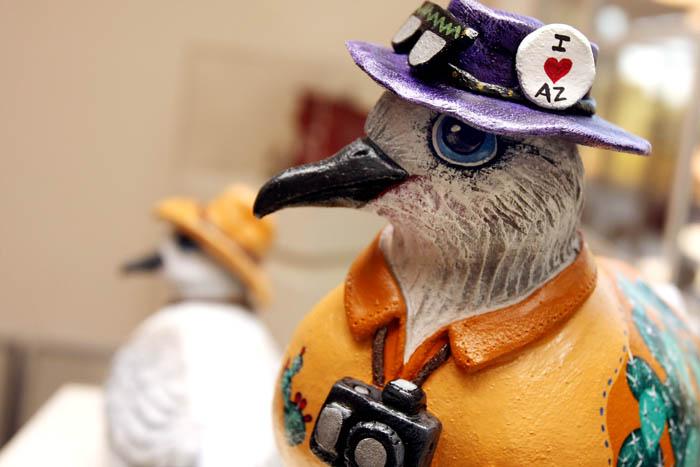 Randy Metcalf/The Explorer, Wendy Timm thought of all the accessories she's seen people wear for Tucson visits to come up with her version of "snowbirds." 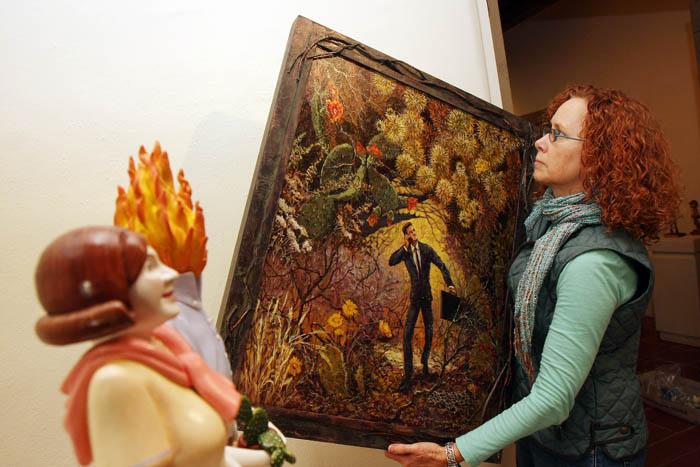 Randy Metcalf/The Explorer, Peggy Hazard, curator of Tohono Chul Park's "Laughing Matters: Arizona Humor" exhibit, hangs one piece of many that will be on display through March 8.
1 of 5

Randy Metcalf/The Explorer, Wendy Timm is one of many artists featured in Tohono Chul Park's exhibit on Arizona humor.

Randy Metcalf/The Explorer, According to artist Wendy Timm, a "javelini" is made with one-part vodka, a whisker of vermouth, and one javelina.

Randy Metcalf/The Explorer, Wendy Timm thought of all the accessories she's seen people wear for Tucson visits to come up with her version of "snowbirds."

Randy Metcalf/The Explorer, Peggy Hazard, curator of Tohono Chul Park's "Laughing Matters: Arizona Humor" exhibit, hangs one piece of many that will be on display through March 8.

When ground squirrels emerge from the tunnels they’ve dug in Wendy Timm’s backyard, the Oro Valley artist has to laugh. She pictures them with hardhats and mining shovels.

And to make sure her visitors see what she sees, she has created sculptures of the amusing critters and tucked them into her landscape — properly attired, of course.

The exhibit, which runs through March 8, comprises regional artists’ answers to the question, “What’s so funny about Arizona?”

For one artist, it’s the fact that saguaros look like people.

For another, it’s the fact that Kokopelli figures pop up all over the place — even on minute hands of watches.

And for several, it’s the ubiquitous winter visitor, portrayed fondly by one artist as an old man in plaid, flapping his arms vigorously as he comes in for a landing.

Some of the images express whimsy while others inspire dark smirks, but all of them conspire with curator Peggy Hazard in her notion that it’s time for a laugh.

“When I started working on this exhibit, the economy was tanking, people were becoming desperate, and I realized this exhibit could be a nice way to lighten the mood,” she said. “People can come and put their worries away.”

The idea for the exhibit came to Hazard when she saw a whimsical Native American pottery bowl at an art show that made her laugh.

“I don’t remember the specifics,” she said, “It was just funny.”

Curators make artistic statements by bringing together artists’ work in meaningful ways, so Hazard set out to make a statement by finding Arizona artists with tongue-in-cheek work.

“I can pretty much make fun of anything,” Timm said. “But it’s loving.”

Timm grew up in Wisconsin watching Westerns such as “High Chaparral,” which was filmed at Tucson Studios.

In her early adulthood, she moved to Southern Arizona expecting to fall in love with the sweeping desert scenery. Instead, the animals in her yard won her heart.

Javelina, quail and lizards cut across Timm’s property regularly. And rather than annoy her with their trespassing, they charmed her with their funny desert qualities, both real and imagined.

“It’s beastly in the summer, but look how we’ve all adapted,” she said.

Environmentalists started fighting to protect the petite creatures back when they made it onto the endangered species list. But there’s something about Timm’s sculpted renditions of the owls that make you think they could fend for themselves.

Maybe it’s the berets and Uzis.

The artist’s javelina sculptures have questionable adaptations, as well.

Javelina tend to deal with their harsh desert landscape by sleeping when the heat is on. But Timm has questioned whether daytime napping, alone, can really explain her pig-like neighbors’ nocturnal energy. She has wondered — mostly while sitting groggy in her kitchen in the early mornings — whether something else might also be at work. Perhaps coffee?

Otherwise, why would so many people pronounce it “Java-lina?”

Timm’s javelina nurse generous mugs of java in their forked hooves or, in one case, a martini. (Actually, it’s called a “javelini.”)

One of Timm’s javelina is enshrined with gold, silver and stylized roses and hangs on the wall. Her name is “Our Lady Javelupe.”

“I’m equal opportunity when it comes to poking fun,” Timm said. “No one’s spared, including myself.”

And these days, the ailing economy is an obvious target for jokes.

When the housing market started to plummet in Arizona, Timm’s thoughts went straight to the ground squirrels.

The other three hills are empty.

“I took those words straight from the newspaper,” Timm said.

And she took her ground squirrel sculptures to Tohono Chul Park’s exhibit. Because when life presents a tough predicament, Timm believes that sometimes the best thing you can do is laugh.

“I don’t have to make a deep, dark political statement with my work,” she said. “I just want it to make my life more enjoyable.”

Details: In tandem with the exhibit, the park will offer a night of comedy that starts at 8 p.m. Feb. 6 in the Wilson Room and will feature editorial cartoonist David Fitzsimmons and comic-magician Tom Potter. Cost of “Comedy Tonight!” is $25 for general admission and includes dessert and coffee. The exhibit will travel next to the Sky Harbor Airport in Phoenix where it will show for six months in Terminal 2.