You have permission to edit this article.
Edit
Welcome, Guest
Home
News
Business
Liven Up
Your Papers

The West will need “good fire” — controlled, managed fire that balances the ecosystem — to stave off deadly, out-of-control fire. We need to know what that looks like.

Over the past few weeks, the West erupted in flames. The lucky among us know this from the news: 3.2 million acres burned in California, 1 million acres burned in Oregon, more than 900,000 acres burned in Washington. Words often fail as those words just failed — to communicate what these fires are actually like up close. Photographs often do better at capturing the drama and emotion. But the pictures that run in news outlets represent a tiny subset of what happens during a wildfire. What we see, and don’t see, shapes what we think about fire. And what we think about fire shapes fire policy. And as the West Coast learned these past few weeks, our fire management policy has left us in a very dangerous place.

We talked to a handful of photojournalists, forest ecologists and firefighters about how fire images get made, and lightly edited parts of interviews are presented below.

The three key takeaways from our conversations are:

1. Fire photos often stir up fear and leave out “good fire,” which the public needs to see in order to understand and support managed burns.

2. Fire photos often make fire look like an enemy best attacked with something like a military campaign, an idea that is often wrong, a waste of money and ineffective.

3. Fire photos make fire look far more ubiquitous than it is, even in the midst of big blazes. 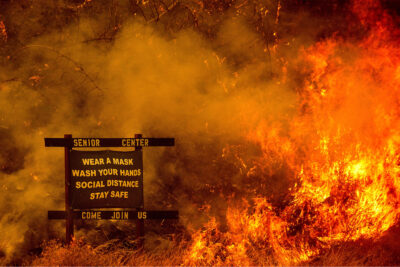 Noah Berger, a freelance photographer who covers wildfire for The Associated Press, took this image of a burning senior center sign that went viral. To some, the photo suggested the center itself was in flames, when it was actually not threatened.

“So another photographer and I had been at this little complex of apartments. This was right when the LNU Fire really burned — within the first, like, two or three hours of it really getting angry. So we were at this little cul de sac, this little complex of like bungalows, and we were kind of waiting for them to burn. And then some residents came up and put out the flames, which is awesome. And then firefighters came up, and they saved this whole complex. And then, just as I was walking out, I saw this sign across the street. And actually, I shot it more, because there was another sign that said ‘Healdsburg This Way’ and I was kind [of] looking for a place-setter image. And then I saw that senior center sign next to it. ...” 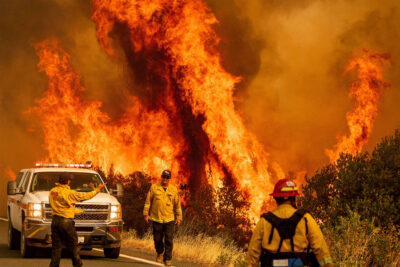 More from Berger, whose work for the AP on 2018 California fires was a finalist for a Pulitzer in photojournalism:

“On these fires you read 300,000 acres, and you think, Oh, you just go there and there’s this wall of flame everywhere. But really, even on these big fires, especially after the first day, it’s often hard to get yourself in position to get the fire photos. From the headlines, it’s like the whole world is burning up. But in reality, your flame fronts are, you know — you have to work to find them.”

“It’s not like, Meet me at the corner of Elm and 5th Street. ... It’s stressful because you’re not coming up with anything a lot of the time. Like on these fires, not even massive ones, to drive the perimeter can take you four hours on [a] dirt trail. And you’re stressed. You want to come up with a photo. ... The other thing that makes it harder is that the fire behavior doesn’t usually kick up until like 1 in the afternoon, so you can’t get up early and get your fire shot and be OK.”

On images of good fire: “I think that’s more of a job for writers. I don’t think that’s something that you can possibly convey visually. ... I don’t see what kind of imagery conveys that fire is good.” 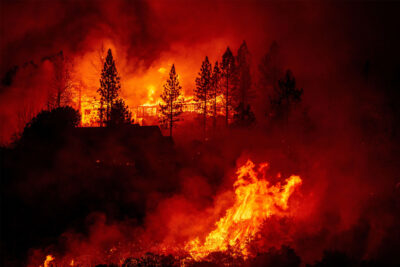 A home is engulfed in flames during the Creek Fire in the Tollhouse area of unincorporated Fresno County early on Sept. 8. (Josh Edelson/AFP/Getty Images)

“I’ll drive up a dirt road for miles and miles and miles and I think there’s just gonna be nothing up there. Then all of a sudden, there’s like a whole neighborhood of ranch-style homes or ranches, and these people have homes out in the middle of the forest, essentially, or a dried forest. Granted, the LMU Fire Complex was an exceptional fire — as was the Camp Fire and Santa Rosa fires in that. With those they burned directly into residential areas. And that was partially, like, wind driven and partially climate driven and also partially terrain driven because a lot of the terrain is a lot drier now than it used to be. But so in some instances, you may see a story about a fire with a house on fire. And that house might be out, to most people, in the middle of nowhere. It may have taken a lot of off-roading to get to that house. It might even be the only house. ...”

“So if there’s one fire where there’s, like, two structures burned, and I, as a photojournalist, I’m lucky enough to have captured one of them. ... Then the story might show as like, Oh my God, there are houses on fire, everything’s burning. But it might just be one house.” 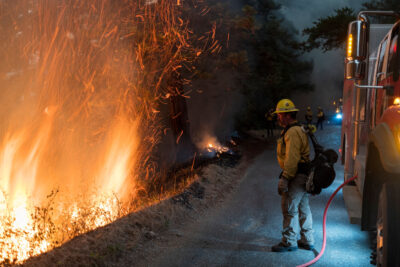 Tim Ingalsbee, former firefighter who is a certified wildland fire ecologist and has a doctorate in environmental sociology:

“Those dramatic images where you see a bunch of firefighters and there’s a big flame and there’s a truck on the side? That’s usually someone lighting a backfire. ... To get a clean frame of a firefighter with a flaming edge [you usually have to shoot] when they have a drip torch in hand. ... That’s where they’re actually creating the new fire that’s with their burnout, the backfire operation. It drives me crazy.”

“Overwhelmingly in the media you see a raging crown fire. They’re dramatic but they’re the minority. They’re the rarest kind of fire. The majority of fires are surface fires. They burn on the ground. I mean, they torch up small trees and they do burn into crowns in certain areas if there’s a steep slope or strong or if it’s a really hot fire. But most of the time it’s creeping on the ground with smaller flames at just kind of a walking pace.” 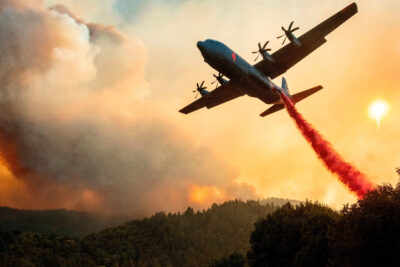 An aircraft drops fire retardant on a ridge during the Walbridge Fire, part of the larger LNU Lightning Complex Fire, as flames continue to spread in Healdsburg, California, on Aug. 20. (Josh Edelson/AFP/Getty Images)

Air tanker drops are like “showing the public, ‘Hey, the cavalry’s here.’ ... It’s just a show. I mean, you know what we used to call them? CNN drops.” 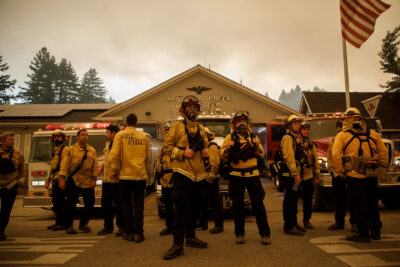 “The ‘geared up’ firefighter you see in the West is off-putting and makes it seem like something the layman could never do. ... Especially when we burn with private folks or tribal members ... all the ‘tactical gear’ is not necessary. ... If we self-identify as a hero primarily engaged in private property protection, then we don’t need to understand how fire is beneficial to the land.” 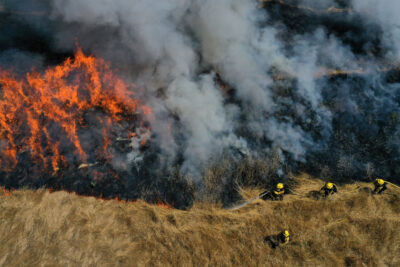 “A lot of what we read in the media we use terms like, The fire destroyed 200,000 acres. And I look at pictures like this and I don’t see fire having destroyed those acres. Maybe rejuvenated? In all likelihood, this is going to be spectacular next spring. You want to go see great wildflowers? Go next spring.”

“I often take my camera out on fires, and when I look at the images afterwards I kind of shake my head and go, Wow, I didn’t really capture the reality here because I mostly took pictures when things got exciting. When there were bursts of flame, or when a tree was torching. If you really want to capture what fires are doing in the system, you have to capture all of that fire, even when it’s not as exciting.” 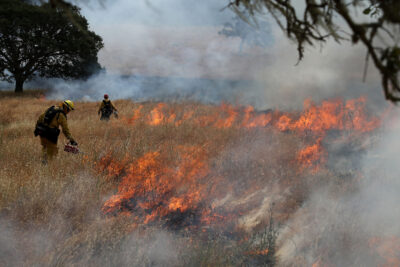 Firefighters use drip torches to ignite dry grass during a controlled burn at Bouverie Preserve on May 30, 2017, in Glen Ellen, California. (Justin Sullivan/Getty Images)

On burning shrubs (which make great photos): “There’s nothing bad about it necessarily, unless your house is there. Shrubs tend to burn hot, but shrub ecosystems are well-adapted to fire. And maybe the lesson there is: You don’t want these shrubs to be growing next to your house.”

On representative fire photos: “The ones that would never be filed to Getty, [a photo agency] look, I’m making air quotes, boring. ... [Most of what happens in fires] looks totally unremarkable. ... Showing photos of that just never make the cut.” 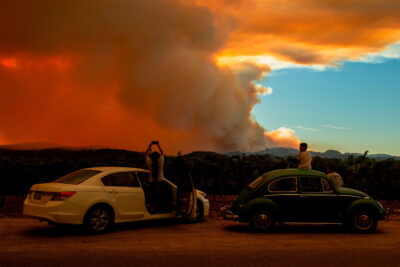 People watch the Walbridge Fire from a vineyard in Healdsburg on Aug. 20. (Josh Edelson/AFP/Getty Images)

“I just was driving the other day near Healdsburg, and one hillside is still burning there. It’s just a little bit of smoke coming out. You can’t really even see flames from the road. So that’s not dramatic enough to get on the news, right? But you’re standing right there and you go, How pretty this looks. Granted, you’re talking to a person that thinks fire can be a very unique and useful source and part of the natural system. I don’t see it as being ugly. ... But my youngest daughter is going: Whoa, Jesus that looks so ugly. Everything’s dead.

“Sometimes you’ll see 60-foot-tall trees with 30-foot shrubs, lots of fuel, very dry. ... You’re going to get big flame, like, and dramatic pictures. And I think that’s appropriate because we don’t want people to get complacent and sit at home. And then the firefighters can’t get in to do their job or the sheriffs are risking their lives to try and get people out. We don’t need that. I mean, our big issue is, in lots of ways, we want to live in nature but we also don’t want to have the negative consequences of living in nature in a fire-prone ecosystem. Right. But, you know, I talked a nice game here but, I’ll tell you what, I was sweating bullets about three weeks ago thinking, Do I have enough insurance? I’m out with a chain saw cutting down the oak tree that I should have trimmed back two years ago.” 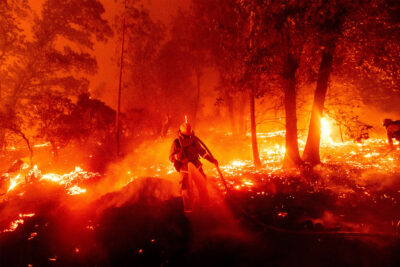 A firefighter battles the Creek Fire as it threatens homes in the Cascadel Woods neighborhood of Madera County, California, on Sept. 7. (Noah Berger/AP Photo)

“Sometimes there are some good photos of flames and whatnot and, and sometimes they are showing the firefighters and their actions. ... What folks miss most of the time are the, just, the heroic efforts to protect lives during mass evacuations, trying to get people out. ... So I happen to be on the Bear Fire right now. There’s fire on both sides of the Feather River, and the Feather River is just a very steep gorge in many places. And firefighters are having to cut line while rappelling down just to try to make sure the fire stays out of different communities. ... I’m not taking anything away from the amazing photojournalists out there, but that’s just too remote. They’re not out there. They’re not going to get photos of that.”