You have permission to edit this article.
Edit
Welcome, Guest
Home
News
Business
Liven Up
Your Papers
1 of 4 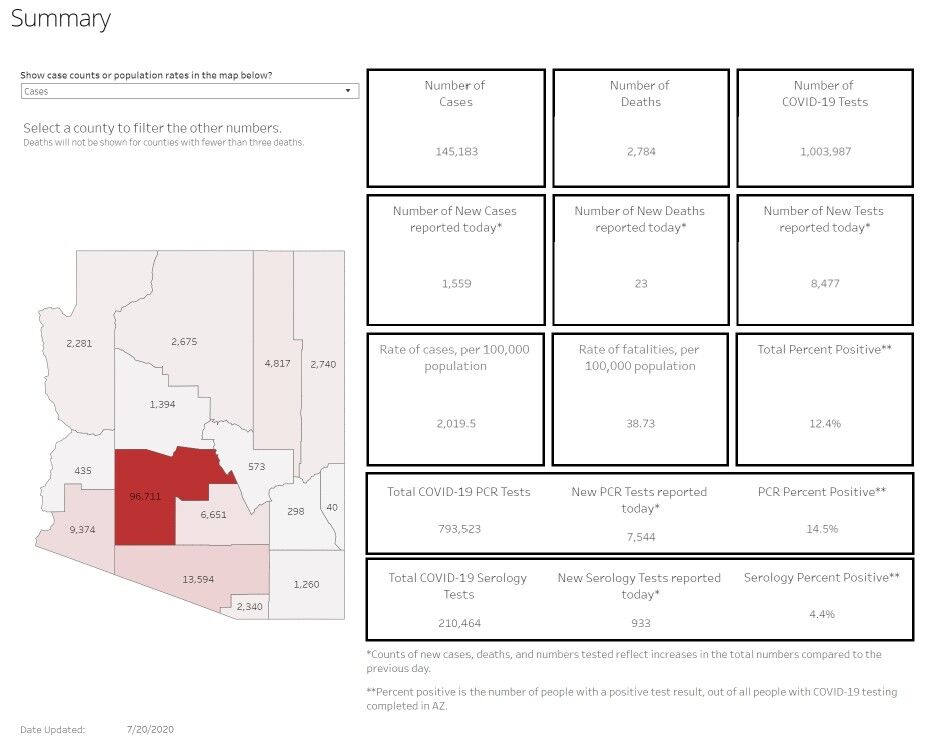 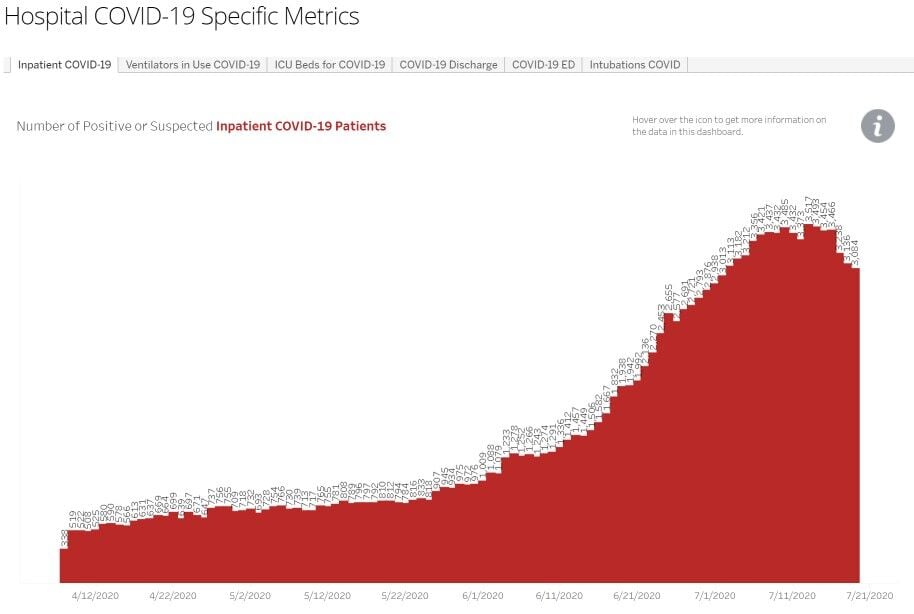 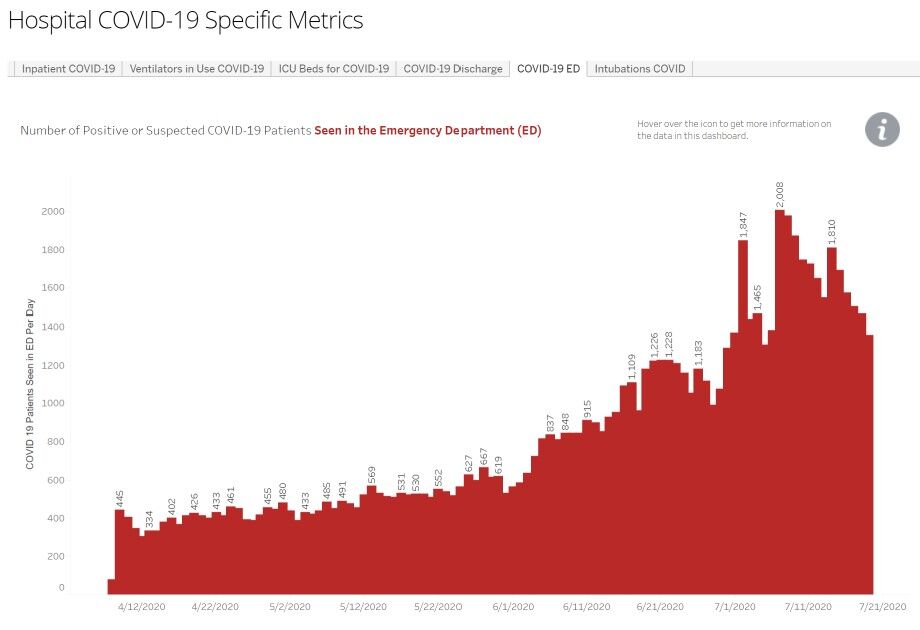 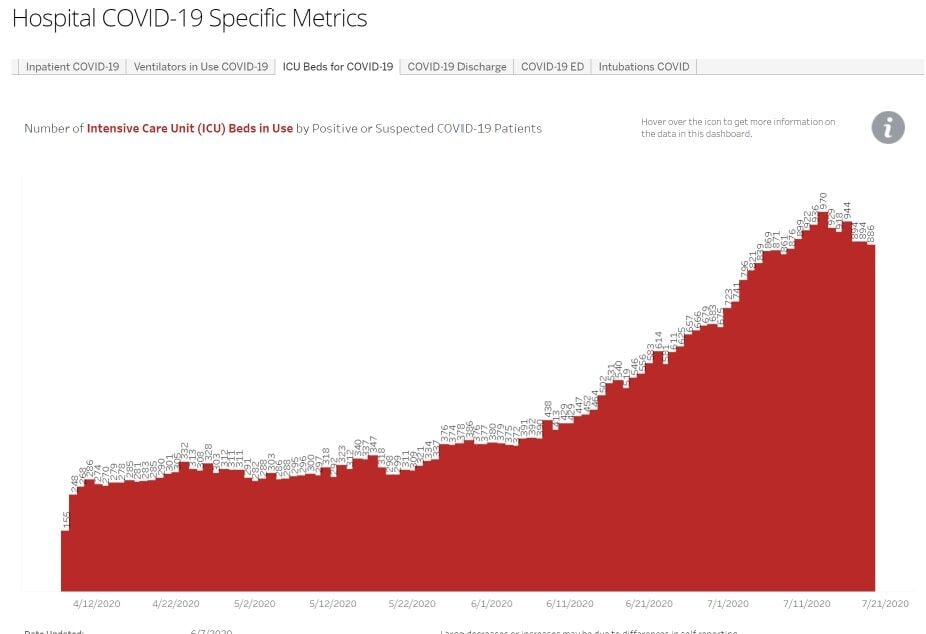 The total number of confirmed coronavirus cases in Arizona climbed past 145K as of Monday, July 20, after the state reported 1,559 new cases this morning, according to the Arizona Department of Health Services.

A total of 2,784 people have died after contracting the virus, including 382 in Pima County.

Hospitals remain under pressure, although they report in slight decrease in the number of Arizonans hospitalized with COVID-19-related symptoms. The report shows that 3,084 COVID patients were hospitalized yesterday in the state, down from a peak of 3,517 on July 13.

Gov. Doug Ducey said last week that mask-wearing and steps to reduce the interaction of people in large groups had resulted in some positive signs regarding the spread of the virus. He cited a slight drop in the percentage of people visiting emergency rooms exhibiting COVID-like illness in the last week, as well as a drop in the total number of cases on a week-to-week basis.

But Ducey warned the state still had a long road ahead in the fight against the deadly virus.

"I want people to get their heads around this," Ducey said. "There's no end in sight today."

While coronavirus cases may be on a slight downward trend in the state, Ducey urged Arizonans to stay vigilant by staying at home and wearing masks while practicing social distancing when out in public to continue the fight against the virus.

"There will be no victory laps," said Ducey, who praised measures set by local authorities to require masks were helping reduce spread, but once again stopped short of a statewide mandate.

"We are disappointed again that the Governor refuses to take stronger actions to curb the spread of the deadly COVID-19 virus," the lawmakers wrote. "More aggressive action is needed now to safely open schools in the future no matter what date is picked. Senate Democrats again urge the Governor to take swift and preventative action. Time is not an ally. Act now, Governor to curtail the spread. Lives, not just livelihoods, are at stake."

The looming question this week: Arizona’s schools and universities. Ducey said at last week’s press conference that he was in conversations with school leaders and university presidents about the best way to move forward with the school year. Many school officials are anticipating an announcement this week from Ducey regarding a further delay in starting the school year.

While Arizona schools are tentatively scheduled to open on Aug. 17 (with some districts starting online programs sooner), Ducey said he would be meeting with Arizona Superintendent of Public Instruction Kathy Hoffman and other state educational stakeholders in hopes of providing more complete information on the gameplan for reopening schools.

“I know people want clarity around this and we’re going to provide clarity,” Ducey said. “I’m going to tell you our kids are going to be learning in the fall.”

Some public health experts say that community transmission is too widespread to safely open the schools as planned. Will Humble, executive director of the Arizona Public Health Association, recently warned that while states that have taken more aggressive steps earlier to slow the spread of the virus will be able to reopen schools, he can’t see the same thing happening in Arizona.

“We just have too much community spread,” Humble said.

Humble, who headed up the Arizona Department of Health Services in the administration of former Gov. Jan Brewer, said there are two main factors to consider when opening schools in the fall: mitigation measures alongside the level of community spread within a school district.

“School districts have some really creative folks and I think they could put some effective mitigation measures in place that would make it safe to open schools if we didn’t have so much community spread,” Humble said. “Because we have the level of community spread that we have, I just don’t see that mitigation measures, which help but don’t eliminate transmission, are going to be adequate to make it a safe environment for teachers and schools and families.”

The state needs a much lower percentage of positive tests and much more hospital capacity before schools can safely reopen, Humble said.

Tucson Unified School District will launch online classes for all students starting Aug. 10 but in order to avoid losing state funding, schools will open on Aug. 17 for any student who wants to attend class in person. However, students will be in "learning spaces" where they will do the same distance learning program that students who remain home will experience. Teachers may or may not be in the classroom, which may instead include a monitor to keep an eye on the students who are in the room. All TUSD families will receive laptops.

Other local school districts have announced a mix of online and in-person options but say they will be ready to go to online-only if Ducey delays the start of the school year once again.

• Ducey announced a new executive order extending the residential eviction moratorium until Halloween. The previous residential eviction moratorium was set to expire on Saturday, July 25. Ducey announced $650,000 would go to various community action agencies to improve staffing and help administer rental assistance programs for Arizonans statewide. Approximately $1.2 million in assistance has been distributed to Arizona renters since late March, according to the Governor's Office, but news reports have revealed that the state is behind on processing applications for aid. Ducey also announced $5 million to establish the Foreclosure Prevention Program to help residential landlords dependent on rental income to survive.

“This will provide targeted relief to homeowners who rely on income from tenants to help them avoid foreclosure,” said Ducey, who added that state and local governments have directed more than $80 million on programs to assist renters and prevent homelessness.

“As goes the coronavirus so goes Doug Ducey’s fortunes among Arizona voters,” said OHPI Chief of Research Mike Noble in a prepared statement. “When the outbreak was being contained, Ducey was popular. Now that cases are on the rise, his disapproval rating is too.”

Those numbers echo a survey by the COVID-19 Consortium for Understanding the Public's Policy Preferences Across States, which showed that Ducey had gone from 57 percent approval in early May to 32 percent in late June.