You have permission to edit this article.
Edit
Welcome, Guest
Home
News
Your Voice
Entertainment
Sports
Obituaries
Purchase Photos
Your Papers
1 of 4 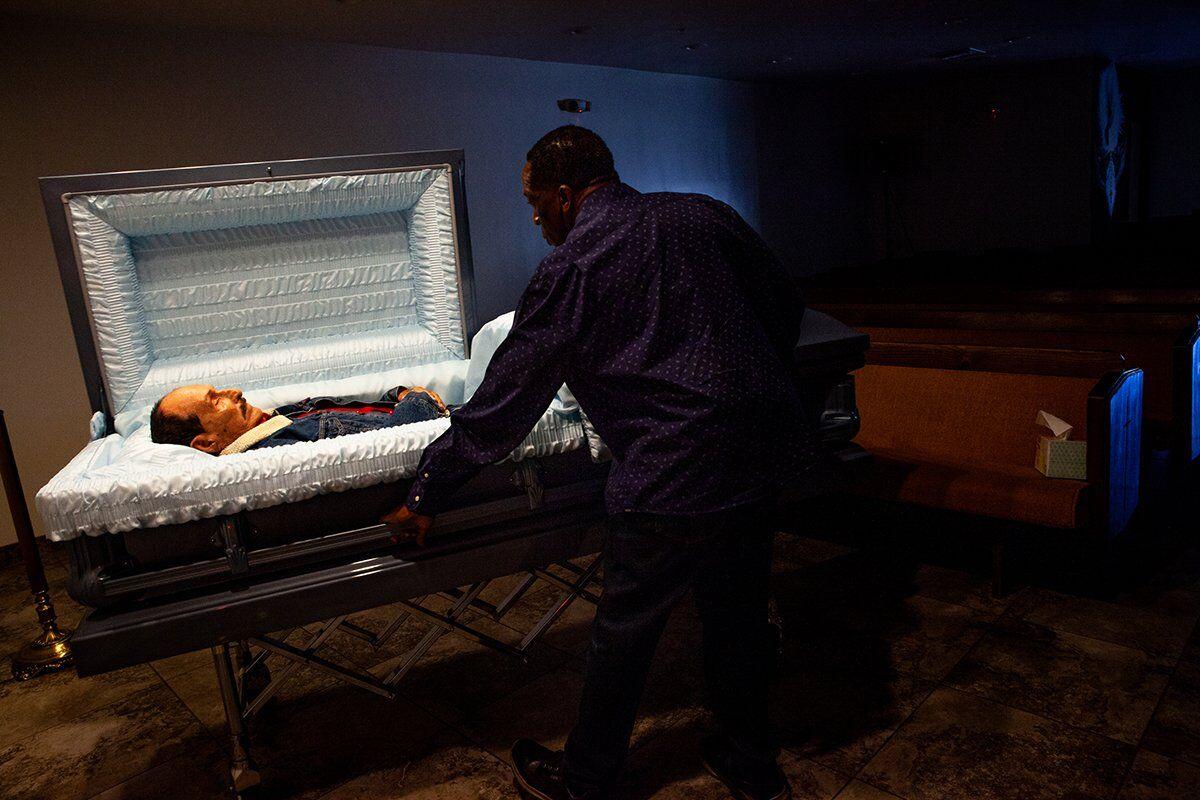 Funeral director Ron Thornson prepares for a service at Peace Chapel Funeral Home in Phoenix. The funeral industry has been one of the hardest hit during the pandemic, but these “last responders” often are among the least recognized for providing essential services. 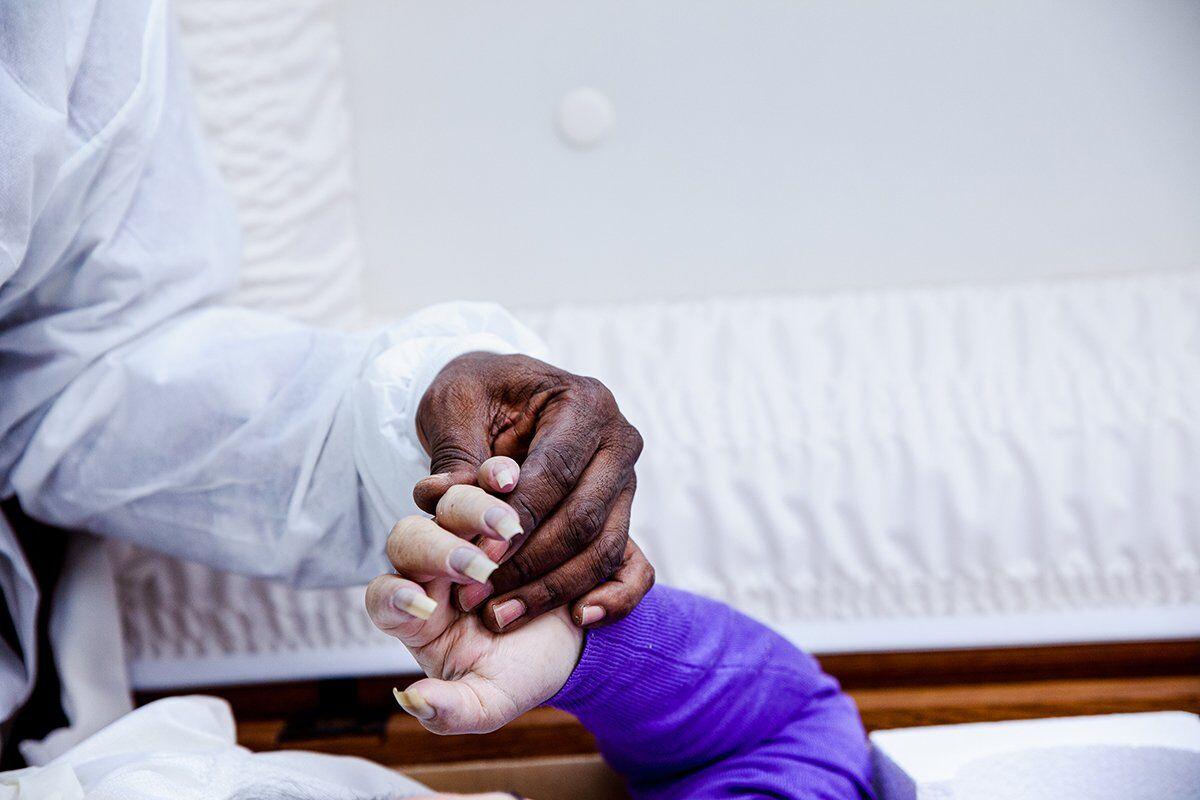 Thornson holds the hand of a deceased woman before polishing her nails. 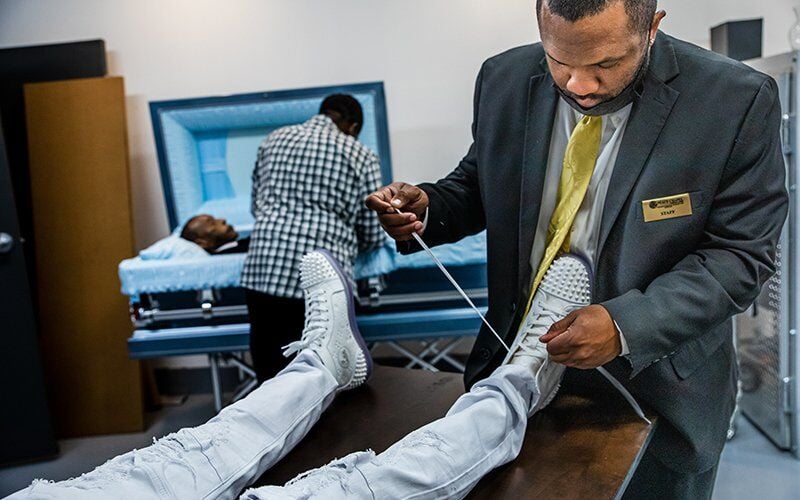 As Thornson works behind him, Burgan ties a deceased man’s shoelaces. He was hired in August to run the office so Thornson could focus on his embalming work. 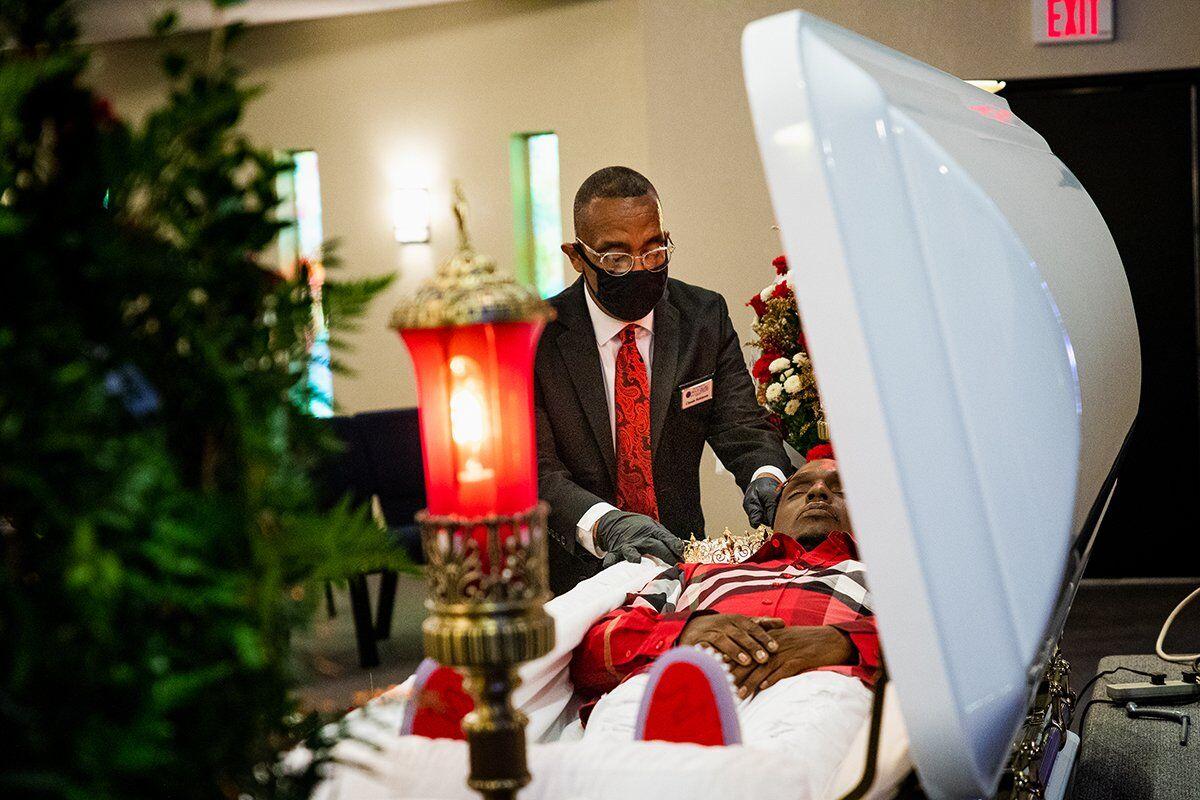 Claude Robinson places a crown next to the body of a young man who was killed in a shooting.

Funeral director Ron Thornson prepares for a service at Peace Chapel Funeral Home in Phoenix. The funeral industry has been one of the hardest hit during the pandemic, but these “last responders” often are among the least recognized for providing essential services.

Thornson holds the hand of a deceased woman before polishing her nails.

As Thornson works behind him, Burgan ties a deceased man’s shoelaces. He was hired in August to run the office so Thornson could focus on his embalming work.

Claude Robinson places a crown next to the body of a young man who was killed in a shooting.

PHOENIX – At 10 p.m. no words are spoken, but a loud buzz reverberates throughout Peace Chapel Funeral Home. It’s the rhythmic beat of an embalming machine pumping a mix of chemicals into a woman in her 50s.

Standing next to the body – working late again – is funeral director Ron Thornson.

Since March 2020, Thornson and his staff have routinely worked 14 to 16 hours a day, without much pause to reflect on the historic events swirling around them during the COVID-19 pandemic.

Like so many other people and businesses across the globe, these workers and this industry were hit hard by the pandemic in myriad ways.

An already trying job grew more stressful, with funeral home directors – often known as the “last responders” – left explaining to grieving customers why they couldn’t mourn in person or have big gatherings to say goodbye. Caseloads also surged as the COVID-19 death toll rose. To date, more than 580,000 people have perished in the U.S. alone.

The assumption, said Claude Robinson, Peace Chapel’s funeral coordinator, is that “death is inevitable with this profession” and that those who work in the industry are somehow immune to the effects of mass casualty events such as a pandemic.

The nature of the job demands that workers keep their emotions masked, Robinson said.

“You are almost taught not to break when you are to serve a family,” he said, explaining that revealing too much could transfer more pain onto those already suffering.

“A lot of people don’t understand that as a funeral service worker, you have a big task,” he added. “You are not just picking the body up, cleaning it, putting makeup on and placing it in a casket. You’re expected) to coach the family, to be a financial adviser and to be a psychologist” during one of the toughest moments in life.

And in a year when death became an excruciating daily experience for most Americans, even these men and women have been touched by it.

“It has affected us all, to a certain degree,” said Thornson. “But we’ve stood strong and supported one another.”

According to the National Funeral Directors Association, the average mortuary receives 113 calls a year, with larger funeral homes getting more. But the number of cases seen by funeral workers in 2020 far outpaced those in previous years.

The U.S. death rate increased 16% from 2019 to 2020, according to the federal Centers for Disease Control and Prevention, and the number of U.S. deaths exceeded 3 million for the first time in history.

In Arizona, deaths increased by 25% compared with 2019, with COVID-19 cases making up the majority of that swing, according to the state health department.

“Throughout the COVID-19 pandemic, funeral directors have been an invaluable part of the community, providing constant support and flexibility as families make already difficult decisions under seemingly impossible circumstances,” Bryant Hightower, 2019-20 president of the National Funeral Directors Association, said in a statement.

“There was and is no road map for funeral directors during this unprecedented time, but they have undoubtedly risen to the occasion and adjusted their services to meet the moment.”

Until March, the bodies coming through the doors of Peace Chapel strained the mortuary’s capacity. The funeral home took care of roughly 300 dead people in 2020, compared with an average of 200 in a year’s time before the pandemic.

Located between Phoenix and Scottsdale, Peace Chapel is a family-run business that operates primarily through referrals. Five years ago, Thornson, who had spent three decades as an embalmer, took over a rundown bar to fulfill his dream of running his own funeral home.

He works both as funeral director and the only embalmer at Peace Chapel. A deeply committed, quiet and private man, Thornson sees his job as not just a way to make a living – but as a necessary public service.

From the moment he steps into the embalming room to when the funeral service itself is held, every action Thornson performs is done with the family of the deceased in mind. All else gets pushed aside.

The job is difficult. The hours often are unpredictable; his body aches from the time spent standing, preparing bodies for families to view; and his mind often is forced to compartmentalize what he sees or feels to focus instead on supporting others at their time of grief.

When COVID-19 began to spread last year, Thornson quickly made adjustments to prevent the chaos some other funeral homes experienced and alleviate delays in services.

And although Peace Chapel never experienced bodies piling up, as other homes did, Thornson had to expand his operation nonetheless. He bought a larger refrigeration cell and, last August, hired two more people to run the office while he focused on the embalming process. Funeral services and visitations also had to be scaled down to help prevent spread of the virus.

For months, the whiteboard used for scheduling body preparation and services was so crowded that Post-it notes had to be attached to the sides. The phones screaming for attention were a constant reminder of the loss inflicted by COVID-19.

Thornson stresses that his isn’t the only business under such pressure.

Sean Russo, a cremationist at the Cremation Center of Arizona in southwest Phoenix, said the facility was so overwhelmed there was no space left in the two, large on-site refrigerators. At the height of the pandemic, he worked up to 30 hours of overtime a week. Only recently have things slowed down.

Some mortuaries – engulfed in death and fearful that COVID-19 could be transmitted by a deceased person – stopped embalming. The CDC eventually released guidelines for mortuary workers and said there was little risk of getting COVID from someone who’d died.

Either way, turning families away was something Thornson never considered. Wearing full personal protective equipment, Thornson committed himself to treat COVID-19 cases with the same amount of care and respect as he does all others.

“I constantly feared for my safety and the staff’s safety,” he said, but added that the “families needed closure.”

Researchers have examined the prevalence of post-traumatic stress disorder in association with professions including the military, law enforcement and health care. But research related to funeral workers is limited.

A 2019 analysis suggested that mortuary workers present higher rates of PTSD symptoms compared with the general population under normal conditions. And a study published last July in the Oxford Academic Journal of Public Health points out the mental health risks funeral workers face because of the pandemic.

“One day, this crisis will end,” the authors wrote. “The mental health consequences will only become fully apparent when daily pressure is no longer enough to keep people going. It is our duty to be prepared to give the proper care, not only to our health care workers but also to funeral directors who have taken care of our deceased relatives.”